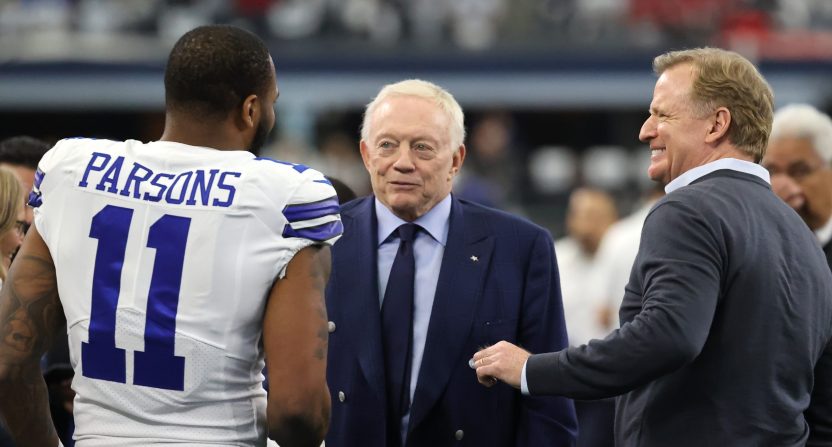 Last week, the NFL decided to appeal Cleveland Browns’ quarterback Deshaun Watson‘s six-game suspension from the league for sexual misconduct. The appeal was not unexpected, as many expected more punishment for Watson. But Watson and the NFL Players’ Association are fighting back.

Watson and the NFLPA are saying that the punishment is fair. And the NFLPA response to the league’s appeal included a long list of past misconduct involving team owners that didn’t lead to league punishment. The NFLPA specifically referenced the league’s handling of cases involving New England Patriots owner Robert Kraft (who was charged with solicitation of prostitution after a massage turned into a sexual encounter in 2019; those charges were eventually dropped), Washington Commanders owner Dan Snyder (accused of fostering a toxic workplace environment, including with charges of sexual harassment), and Dallas Cowboys owner Jerry Jones (the league didn’t do its own investigation of a 2015 scandal that saw former Cowboys vice president of communications Rich Dalrymple accused of voyeurism, and saw a $2.4 million settlement with four former cheerleaders, which Jones only addressed publicly earlier this year).

The NFLPA is referencing the part of the NFL’s Personal Conduct Policy that says “Ownership and club or league management have traditionally been held to a higher standard and will be subject to more significant discipline when violations of the Personal Conduct Policy occur,” and citing those three cases in particular to say that the league handed out less punishment there than they did to Watson. But Jones (seen at center above with Cowboys’ linebacker Micah Parsons and NFL commissioner Roger Goodell) doesn’t appear too concerned about being specifically mentioned in the NFLPA response. On Sunday, Jones told Clarence Hill of the Fort Worth Star-Telegram these kind of comparisons are “what you get when you are part of the NFL.” Here’s more from that piece:

“It is a standard players association comeback,” Jones said. ”That is the drill. That is the drill to go around to say you didn’t punish such and such. Anybody would know that every player case and every case that involves non-players in the NFL are dealing with dramatically different principal facts, which is all the difference in the world.”

…“It would be like walking down to the courthouse and saying, ‘you didn’t give that guy that much’ and not take into account what the action was or the circumstances behind it,” Jones told the Star-Telegram. “That’s called shooting volleys. That’s just shooting stuff over your back. That’s the way I look at it when I see something like that.”

…In his mind, none of it has any bearing on the Watson case. “I can’t talk about any club, Watson or to refer to anybody’s punishment,” Jones said. “I can only say that is what you get when you are part of the NFL. It’s not unexpected.”

As for Watson’s case, NFL commissioner Roger Goodell has hired former New Jersey attorney general Peter C. Harvey to hear it. There is no specific timeline for a ruling, but the Personal Conduct Policy says appeals will be “processed on an expedited basis.”

[The Fort Worth Star-Telegram; photo from Kevin Jairaj/USA Today Sports]