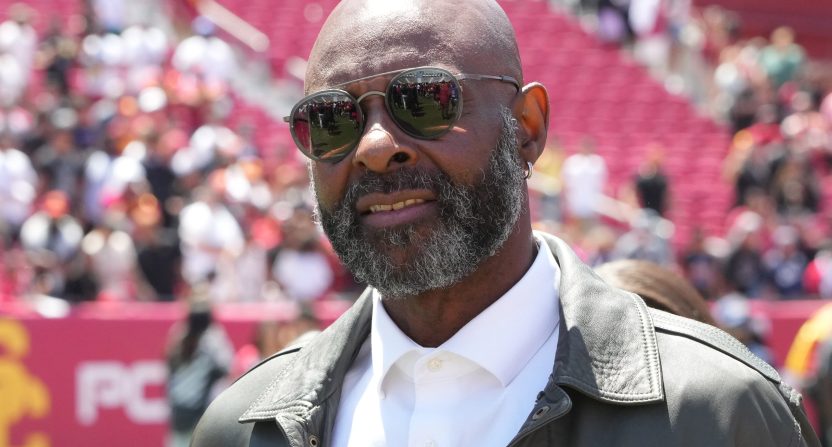 San Francisco 49ers great Jerry Rice knows what it’s like for his team to be engulfed in a quarterback controversy.

During his decade-plus tenure in the bay area, Joe Montana was the clear-cut No.1 guy on the roster for a long time. That’s until Steve Young came in the picture, causing a bit of friction between the two. Ultimately, Young would take over once Montana was traded to Kansas City, winning another Super Bowl as the leader in 1995.

Rice is in Tahoe for the American Century Championship celebrity golf tournament this week. There, he spoke to 95.7 The Game’s Kristen Moran Thursday, and had some thoughts on the current QB situation between Jimmy Garoppolo and Trey Lance. Rice said the team should embrace the competition.

“I don’t actually know what’s going to happen there,” Rice told Moran. “The thing is, they should put the best guy on the field. Jimmy G just had surgery, he’s not 100 percent right now. So I don’t know if he’s gonna be the guy or Trey Lance is gonna be the guy. Let ‘em compete. Bill Walsh always opened the door for competition.  Let them compete, and the best guy should be the starter.”

“They should put the best guy on the field.” @JerryRice on #49ers Jimmy G and Trey Lance pic.twitter.com/LtYMwrMvX8

Although there’s been talk that Garoppolo’s time may be limited in San Francisco, there don’t appear to be a lot of current suitors for him, especially after Baker Mayfield was dealt to the Panthers. Garoppolo is also coming off shoulder surgery and will make $26.9 million this season.

The expectations are high for Lance, who is only 22. However, if Garoppolo is still on the roster and finally joins the team again in training camp, it will certainly make for a lot of headlines to talk about as we go through the preseason. Shedding Jimmy G’s large salary could help put that money into improving other areas of the field, but a reunion is still a possibility.