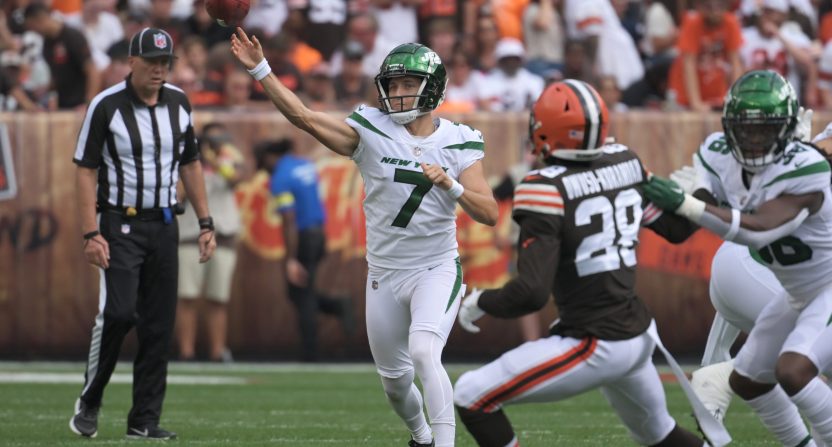 The New York Jets struggled in their first game of the season due to the absence of second-year quarterback Zach Wilson. But the Jets have already found a way to get more creative with their play-calling in Week 2.

Late in the first quarter, the Jets were stopped on third down by the Browns. That saw head coach Robert Saleh bringing out the punt team.

That is when he decided to try and convert an unconventional first-down with a pass from Jets punter Braden Mann. That worked out in a big way.

Mann was able to hit Jets wide receiver Jeff Smith for a 17-yard gain to get into Cleveland Browns territory. And many Jets’ fans took to social media following the trick play, with lots of them excited about the innovative play calling from Saleh.

You wanna get nuts? Let’s get nuts #Jets pic.twitter.com/AUNanMT9JC

It’s Week 2 and the Jets QB1 is their punter. pic.twitter.com/4czNYvPBRf

The Jets fooled EVERYONE with the fake punt 🤯pic.twitter.com/PmjgghOHTB

This gutsy call by Saleh would ultimately end up paying off in a big way for the Jets. They capped the drive off with a two-yard touchdown pass from quarterback Joe Flacco to former Ohio State standout Garrett Wilson.

Watch the bottom of your screen 😍 @GarrettWilson_V#NYJvsCLE on CBS pic.twitter.com/WCkCuFgwV8

This marked just the second touchdown of the season for the Jets’ offense, which can largely be credited to the trick play proceeding it from Mann.

Many critics of Saleh questioned his decision-making after deciding that Joe Flacco would be the team’s starting quarterback. Some of them hoped that backup quarterback Mike White may instead start for the team after Flacco’s poor performance in Week 1.

While that decision is still very much in question, Saleh at least seems to realize that in order to win games with their current roster, they will need to get bold with their play-calling. And doing so has certainly paid off thus far for the Jets.