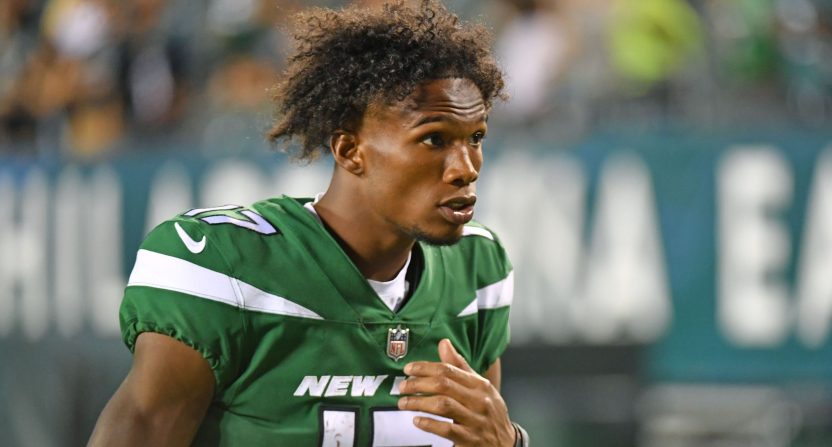 As was the case in each of the previous 13 meetings between the two teams, the New England Patriots defeated the New York Jets on Sunday. New England won with a dramatic punt return for a touchdown in the game’s final seconds. That finish will not soon be forgotten. But from New York’s perspective, the bigger story from Week 11 was the team’s brutal offensive output. And one member of that offense made his frustrations known when the game was over.

Rookie receiver Garrett Wilson didn’t name anyone specifically. But he blasted the Jets offense, saying “this s**t is not okay.” And he didn’t stop there.

Garrett Wilson says "this s—'s not okay" in reference to the Jets' offense:

"We've got the dudes. It's time to be consistent. It's time to start winning the games we should win." pic.twitter.com/eipi6rZ0sC

Wilson didn’t name anyone specifically. The general feeling among football fans, though, was that he was referencing his struggling quarterback, Zach Wilson.

This is a little telling… https://t.co/b6jHeG3L5W

The problem is your QB thinks he played just fine. Bench the twerp. https://t.co/iS5XbiyZch

Translation. The WRs are getting frustrated with the QB. Not good. https://t.co/1lw1LjSiq5

Regardless of who’s to blame, objectively, there’s no disputing Wilson’s frustration. Wilson caught only two passes for 12 yards. His quarterback completed only nine passes for 77 yards. The Jets also ran for only 59 yards with Wilson (Zach) leading the way with 26. When factoring in New England’s four sacks for 33 yards, the Jets gained only a paltry 103 yards on offense.

Something clearly needs to be done to get the offense clicking. If that doesn’t happen, then Sunday’s game will not be the last time that New York wastes a dominant outing from its defense.