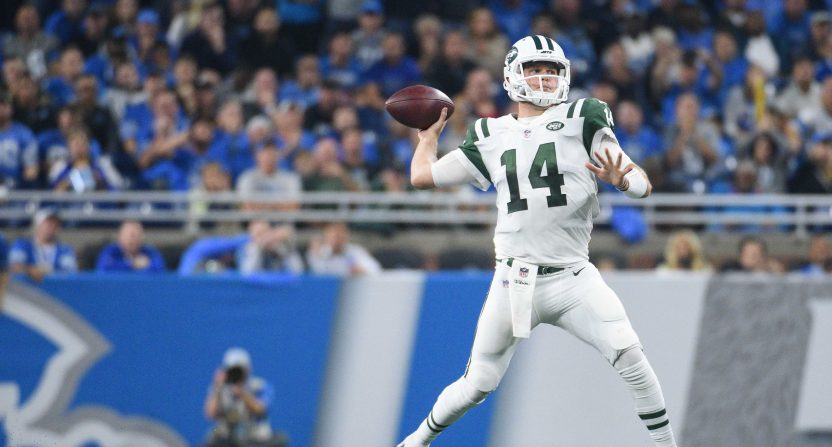 When you consider that the Lions returned an interception for a touchdown on the very first play from scrimmage on Monday night in Detroit, it’s *especially* incredible that they lost 48-17 to the Jets.

And to a rookie quarterback.

After throwing his first career pass for a pick-six, Sam Darnold completed 15-of-20 passes for 198 yards and two touchdowns.

The first touchdown pass came on this 41-yard strike to Robby Anderson:

So, Darnold turned a nightmare beginning into a very impressive game and 31-point victory.

The Jets win their opener by beating the Lions 48-17. It's the Jets' 2nd-largest season-opening win in team history.

Their 48 points set a franchise record for most in a road game.

Sam Darnold is the first QB to win his first start by 31 or more points since Tom Brady in 2001. pic.twitter.com/EsXr3gdLGk

As for the Lions’ quarterback play? Yikes.

Matthew Stafford completed 27-of-46 passes, for 286 yards, one touchdown, four interceptions, and a 47.9 passer rating.

Just like Darnold, Stafford threw an interception before he completed a pass.

The third quarter was particularly a disaster for the Lions, with the Jets outscoring them 31-7. For some perspective on how crazy 31 points in the third quarter is (and again, from a rookie quarterback):

A fantastic beginning to the Sam Darnold era, and a brutal beginning to the Matt Patricia era in Detroit. Allowing 48 points — granted some of that is on the Lions’ quarterback play — isn’t what you want to see out of a team coached by a defensive-minded head coach (Patricia was the Patriots’ defensive coordinator from 2012-2017).

The Jets will look to keep things rolling with a couple of favorable upcoming games, vs the Miami Dolphins and at the Cleveland Browns.

The Lions, on the other hand, only have things getting more difficult over the next several weeks: at the San Francisco 49ers, vs the New England Patriots, at the Dallas Cowboys, and vs the Green Bay Packers. Patricia will need to make some big-time adjustments to keep the Lions in decent shape by the end of that stretch.