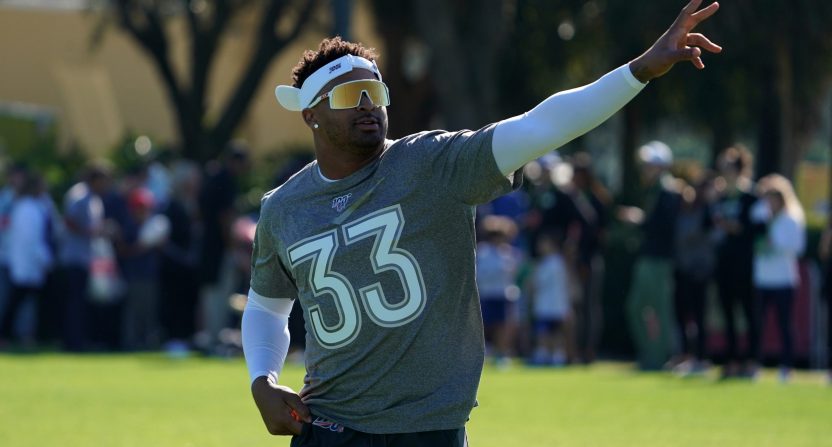 New York Jets safety Jamal Adams has wanted to sign an extension before entering the final year of his rookie contract, and the 2019 first-team All-Pro selection clearly no longer feels optimistic about those talks.

On Thursday, Adams demanded a trade, according to ESPN’s Rich Cimini.

This request was made earlier today. https://t.co/VzST3WjzPS

Adams was selected by the Jets with the sixth overall pick in 2017, and the LSU product has lived up to expectations. The two-time Pro Bowl selection had one interception, one touchdown, and 6.5 sacks (a ridiculous number for a safety) in 2019. He’s the Jets’ best player.

He wants to be the NFL’s highest-paid safety, which would mean topping the four-year, $58.4 million deal ($33 million guaranteed) that the Chicago Bears gave Eddie Jackson in January. And with Adams’ production so far, to go with a very young age of 24 years old, he has a pretty good case for that kind of contract.

Just about every team would be thrilled to add Adams, but how many teams would be willing to do it at the cost? The Jets would surely demand premium draft pick capital in a trade, and then you have to be able to pay Adams the extension he wants.

Update: According to Calvin Watkins of The Dallas Morning News, “there are certain teams Adams would be willing to be traded to where he won’t request a contract extension, at least not right away.”

ESPN’s Adam Schefter provided a list of teams that Adams would welcome a trade to:

Now, the Dallas Cowboys have known to be interested in Adams for a long while, as this October 2019 tweet from Connor Hughes of The Athletic shows:

Source confirms the #Cowboys are very, very much in on S Jamal Adams. "They want him,” one told me. #Jets are asking for “a lot … a whole lot,” a second source added.

Trade deadline is at 4p.m.

On Memorial Day, NFL Network’s Ian Rapoport reported that there isn’t any traction on a Cowboys trade for Adams.

From a Memorial Day edition of NFL Now: There isn't any traction for a #Cowboys trade for Jamal Adams right now, and he may have to wait for an extension from the #Jets like everyone else. pic.twitter.com/3I9bC4udxz

With Adams “officially” demanding a trade, perhaps those talks will pick up again with Dallas. Then again, the Cowboys already have quarterback Dak Prescott’s next contract to worry about, and that deal could be in the neighborhood of $35 million annually. But when the Cowboys are in win-now mode and a superstar becomes available? Never count out Jerry Jones.

The Jets could just keep Adams, of course. But there’s the possibility he holds out and chooses to sit out games.

One thing’s for sure: this Adams-Jets drama isn’t going anywhere until an extension is signed — which appears far less likely now — or a trade happens.