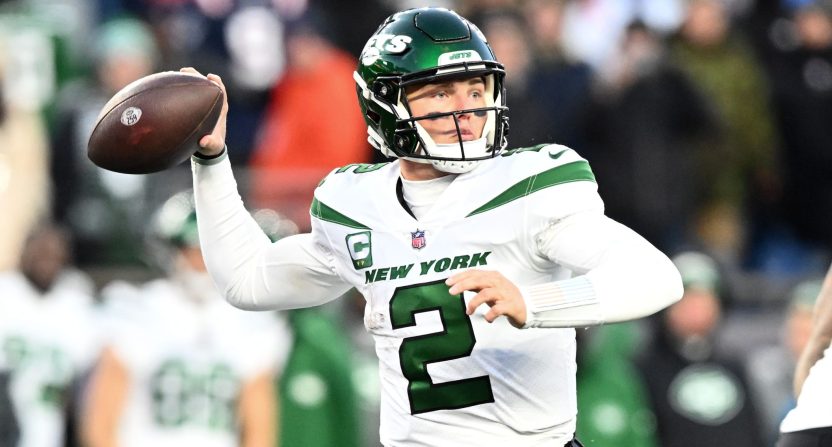 There’s been a ton of criticism surrounding New York Jets quarterback Zach Wilson after his horrific play on Sunday against the New England Patriots, and later his refusal to take any accountability for his poor performance after the game.

A number of Jets players were notably upset after Wilson said that he did not let the Jets’ defense down against New England despite only scoring three points on offense in the game.

.@Connor_J_Hughes: "Do you feel like you let the defense down at all?"

It’s clear that this situation has caused a clear divide in the Jets locker room, and Wilson addressed his comments on Wednesday.

Zach Wilson says criticism over his postgame comments was "deserved":

"The way that I handled the situation wasn't right." pic.twitter.com/UtDrv575lS

This also comes on the same day that the decision was made by Jets head coach Robert Saleh that Wilson will not start this weekend against the Chicago Bears.

Mike White will be the team’s starter for the upcoming matchup, with veteran quarterback Joe Flacco serving as the team’s primary backup for the game. Wilson will be inactive.

While an apology is a good start for Wilson to get back into the good graces of his teammates, many believe that he still has a long way to go to get his starting job back.

Good article on Zach Wilson and his apology to his teammates. That was a necessary step in my opinion, & truly the only apology needed. As long as the locker room feels it’s genuine it’s time to move forward and try to win games.. Also, time for us talking heads to do the same.

Good on Zach Wilson to apologize and acknowledge his behavior and failures. I know grown men who can’t even do that.

Good on Wilson for facing the music and saying all the right things after a tumultuous 2-3 days. I'm sure addressing the team went a long way too. Can't take back the past but he certainly can turn things around from here. Curious to see how it plays out. #NYJ https://t.co/GszsgDSZU1

He had to be benched as much for that as he was for his terrible play. Agent doing crisis management. https://t.co/jj0gIMiDoY

Obv had to be done. I still give him credit for doing so. Plus it was likely past his bedtime, so even more props. https://t.co/MEFoiq9N9Y

It’s hard to see exactly where the Jets go from here with Wilson. The Jets have actually performed well with Wilson under center this year, with a 5-2 record in games he has started this year.

However, the team has been winning in spite of him rather than because of him. New York notably spent a ton of capital on Wilson, selecting him with the No. 2 pick in the 2021 NFL Draft.

He may get another chance to start for the organization, but he will first need to prove he can be a good teammate from the bench this weekend.