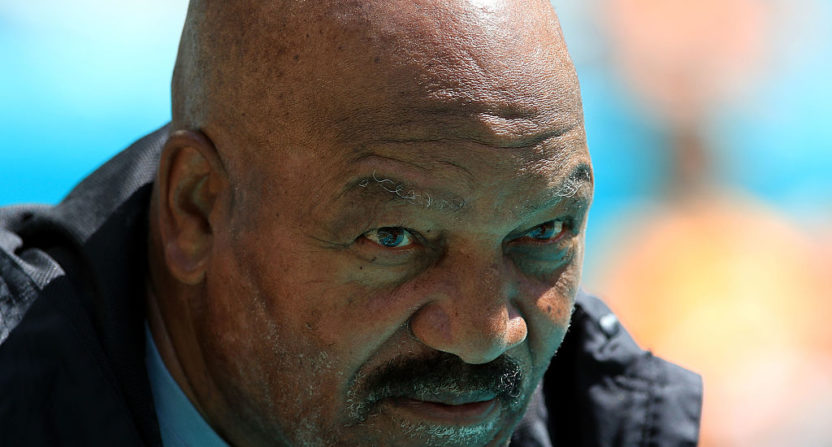 The ongoing saga of Colin Kaepernick’s NFL career (or what’s left of it) in the wake of his national anthem protest has elicited varied opinions from just about everyone in the business of giving opinions.

Today, that list expanded to include Jim Brown, one of the best football players of all time, who also managed to blend his career with activism for multiple causes. But if you expected that to mean Brown would express unwavering support for Kaepernick, you’d be mistaken:

“Colin has to make up his mind, whether he’s truly an activist, or whether he’s a football player,” Brown said. “If you try to be both in a situation, football is commercial, you have owners, you have fans, and you want to honor that if you’re making that kind of money. If you have a cause, I think you should organize it, present it in a manner where it’s not only you standing on one knee, but a lot of people that are going to get behind each other and do something about it.

I ask you one question: Who is Colin calling on to follow what he’s talking about? So many of us have always done it, and we’re here to help anyone that wants to do it, but I would advise the young man, if you’re a football player, play football. If you’re going to be a real activist, use your money, use your notoriety.”

“If I sign for money, then these people I sign with, they have rules and regulations,” Brown said. “I’m an American. I don’t desecrate my flag and my national anthem. I’m not going to do anything against the flag and the national anthem.”

Those comments were made to ThePostGame.com, and you can watch the relevant interview here:

.@JimBrownNFL32 gives us the 'real deal' on @Kaepernick7, flag, anthem and being an activist. pic.twitter.com/MMcLX3dteb

Now, of course Brown’s opinion should be respected and listened to; he’s more than earned that right. And there’s nothing wrong with being critical of Kaepernick, if that criticism incorporates the facts of the situation. But Brown doesn’t seem to quite have a full grasp of Kaepernick’s protest, his activism, and the ramifications of what he’s doing. Nor does he seem to understand that in 2017, being a football player is intertwined with money, notoriety, and one of the biggest platforms for protest that still exists.

Jim Brown is 81 years-old, and he played nine years in the NFL. It’s understandable if he isn’t quite fully aware of what Kaepernick’s protest meant, or the following it’s created, or how much money Kaepernick has given to various charitable causes. And it’s just as understandable that he might not have the perfect answer ready as soon as a microphone is in his face.

He just sounds a bit confused, and it’s fair to wonder whether his opinion would be different if presented with all the facts.