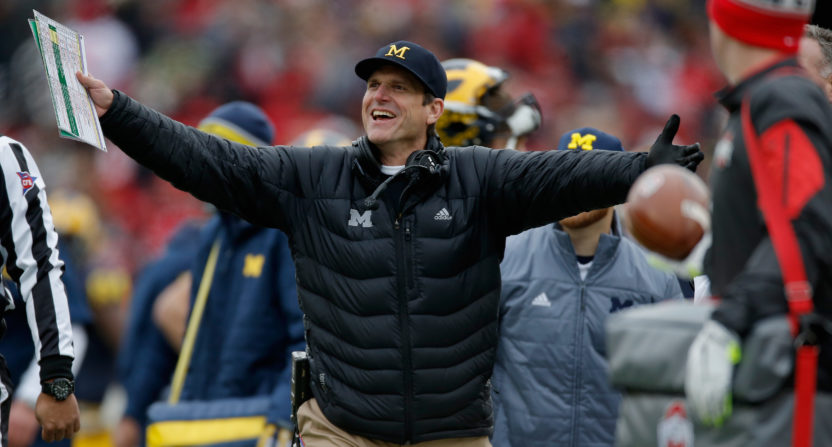 Ever since the Michigan Wolverines’ great 2021 season ended with a loss to the Georgia Bulldogs in the College Football Playoff semifinals, there has been a lot of speculation about Jim Harbaugh’s future.

Harbaugh, who said recently he’d coach at Michigan for free because he loves it so much, said after the game that he sees this past season as a “beginning” for the program. However, that hasn’t stopped the speculation from running rampant, especially as a franchise like the Las Vegas Raiders is looking for a coach to make a big splash with.

Harbaugh, for all his faults, saw huge success in his short stint with the San Francisco 49ers (44-19-1 and a Super Bowl appearance). So why wouldn’t an NFL franchise want to throw a bunch of money at him now and see if he can replicate it?

According to The Athletic’s Bruce Feldman, the rumblings are getting louder that it might actually happen.

“I think it’s real,” one source told Feldman this week when asked about Harbaugh being interested in heading back to the NFL. Along with the Raiders, the Chicago Bears could present an intriguing opportunity for him, presuming they do fire Matt Nagy.

We’re certainly at the point where no one believes a college head coach when they say they’re staying somewhere, so there’s going to be more smoke about this until all the NFL head coaching jobs are officially taken. But until then, the speculation is getting a lot of people talking on social media, especially with the reminder that Harbaugh took a big pay cut this year.

Georgia beat Michigan so bad their coach might leave the sport. https://t.co/giNqQlf9nK

i know it says raiders, but if the bears wanna turn around their dumpster fire and keep investing in justin fields, they’ll give the keys to harbaugh and his k-mart khaki’s.

i bet he’ll win wherever he goes https://t.co/ZEsW0qxyuO

Harbaugh took a big pay-cut last year to stay at Michigan. Then he won the B1G and made the playoff. Meanwhile coaches significantly less successful and accomplished than him got paid 2x his salary.

AKA time to give me my money back and then some. https://t.co/By1vuSjb7V

The “selfless” coach who “took a cut to get his assistants paid,” and “owned up to his failures” now wants that money back plus interest and a raise after winning one game. Then what happens next year after reality hits and they’re back to where they belong? https://t.co/iOlAnjwMoz

This ends with Urban at Michigan https://t.co/5X2KBz8Nxz

We’ll see if there’s a fire where this smoke is coming from, or if we’ll hear some kind of new extension (a year after his last extension) soon enough.