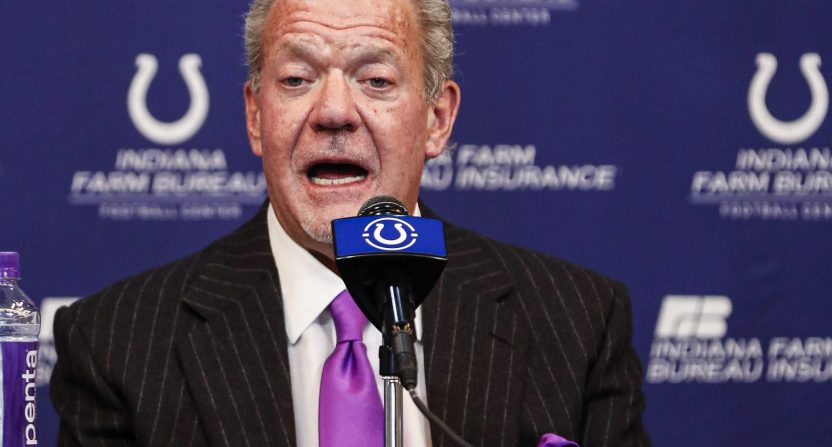 Indianapolis Colts owner Jim Irsay has not been mincing words about how badly he wanted to move on from Carson Wentz after this last NFL season.

Despite having six Pro Bowlers on their roster, the Colts failed to make the playoffs due in large part to a season-ending loss to the lowly Jacksonville Jaguars. Just about every decision-maker in the organization put the blame at the feet of Wentz, who failed to lead the team as hoped. Trading their starting quarterback just one year after acquiring him in a costly trade suddenly seemed very possible.

Indeed, the team traded Wentz after the season to the Washington Commanders and then traded for Matt Ryan to replace him.

Now, Irsay is telling anyone who’ll listen that he was let down by Wentz and knew that the team needed to move on from ASAP after the disappointing finish to the season.

“I think the worst thing you can do is have a mistake and try to keep living with it going forward,” Irsay said, via the Indy Star. “For us, it was something we had to move away from as a franchise. It was very obvious.”

While Irsay was already concerned about the situation beforehand, the loss to the Jaguars sealed the deal in his eyes.

“No disrespect to Jacksonville, but I mean, they’re the worst team in the league. You play well and hard for the first quarter or so, and they’re looking to go to their locker room and clean it out. I’ve never seen anything like that in my life,” Irsay said. “You say, ‘My God, there’s something wrong here.’ It needs to be corrected. I think that we feel like we did.

“Your guy’s gotta pick you up and carry you through Jacksonville. He has to do it. Not an option. Has to. No excuses, no explanations.”

Irsay added that chemistry is such a major factor when it comes to building an NFL team and the chemistry with Wentz just wasn’t there.

“You search for the right chemistry with any team,” Irsay said. “In football, it’s as important as any sport that there is,” said Irsay. “If that chemistry is off, if it isn’t there, it can be extremely detrimental and lower performance to a degree that is stunning and shocking.

“For us, the fit just wasn’t right. I don’t know why. A lot of times you don’t know why, but you know it isn’t, and it was important for us to move in a different direction.”

It’s for the best that everyone moved on from the disappointment of last season. The Colts and Matt Ryan both get to start over. Carson Wentz gets the chance to prove himself anew. And Jim Irsay gets to say that he fixed the “mistake” quickly.