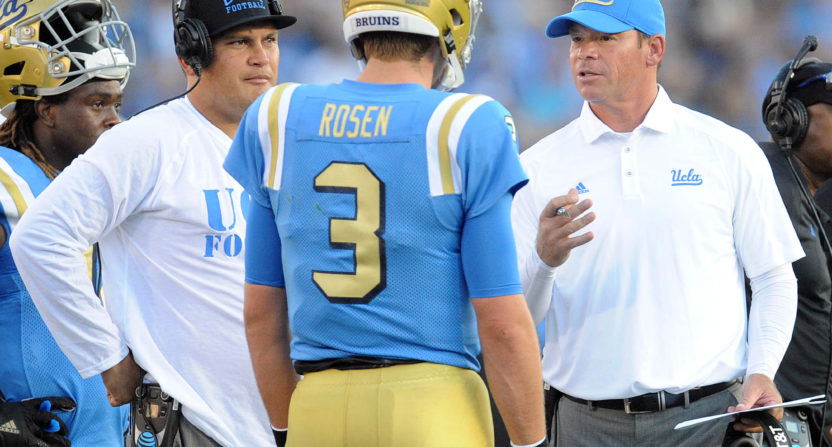 “Because of fit, I would take Sam Darnold if I were the Cleveland Browns. I think [he has] that blue-collar, gritty attitude. I think his teammates will love him. I think the city will love him. He’ll say the right things. He’ll come in and represent well. I think he kind of represents what Cleveland is. And then if I was one of the New York teams, I’d take Josh like that [immediately]. I think they’re both going to be great pros.”

So, Mora specifically said he thinks Darnold should go to Cleveland “because of fit,” and said that the Giants or Jets should then draft Rosen immediately in the ensuing picks. And he said he thinks they will both be great pros.

Mora even went on to say during NFL Network’s NFL Total Access that he thinks Darnold-Rosen could be like the Brady-Manning debate down the road (via NFL.Com):

“I think some day hopefully we’re talking about the Peyton Manning-Tom Brady debate. Which one’s better? I think both of those guys can be those types of guys,” Mora said during Monday’s Total Access.

It’s still odd that Mora wouldn’t immediately clamor for his star quarterback of the last three years to be the top overall pick, regardless of fit. It’s even more confusing when you consider that two years ago, Mora said that Rosen would’ve been the No. 1 overall pick in the NFL Draft  as a freshman.

Now, within days, Mora is back dishing some more unflattering takes on Josh Rosen, this time to Peter King and Sports Illustrated. First, Mora sought to clear up a bit of what he said last week, although it doesn’t really change anything:

“I put it in the context of ‘fit,’” Mora told me. He strongly emphasized the word “fit” in our conversation. He said Darnold has “the underdog mentality that I think will fit so well in Cleveland, a franchise that’s really been down.”

Fit or not, he’s basically saying he thinks Rosen isn’t as equipped to succeed in Cleveland as Darnold. But Mora then called Rosen the top quarterback in the draft:

Of his own quarterback, Mora said: “Josh, I think, without a doubt, is the number one quarterback in the draft. He’s a franchise-changer. He’s got the ability to have an immediate impact. His arm talent, intelligence, and his ability to see the game and diagnose the game is rare. He’d come to the sidelines after a play and it was uncanny—he could right away say exactly why he made every decision.”

Which, okay, except for that you also don’t think he has a mindset to succeed in anything other than a perfect, winning organization, which apparently matters quite a bit to Jim Mora. But he saved the best for last:

“(Rosen) needs to be challenged intellectually so he doesn’t get bored. He’s a millennial. He wants to know why. Millennials, once they know why, they’re good. Josh has a lot of interests in life. If you can hold his concentration level and focus only on football for a few years, he will set the world on fire. He has so much ability, and he’s a really good kid.”

It sounded like Mora thinks Rosen would be well-served to be pushed by quarterback mentors like Shurmur (Giants) or Jeremy Bates (Jets), and to learn for a year or so from Eli Manning (Giants) or Josh McCown (Jets).

What is he talking about? Seriously, it’s baffling; generational generalizations aside (and it’s also worth noting that Rosen, born in 1997, barely qualifies as a millennial at all), what sort of authority does Jim Mora have to pontificate about things like this? Moreover, why would he? What does Jim Mora gain here? If Rosen had gone on television and said “Jim Mora held me back” he’d get killed for it.

Jim Mora Jr is the same guy who tried to fit prime Michael Vick into a traditional West Coast offense, threw Olindo Mare under the bus to pass the buck in Seattle, and now blames Josh Rosen for not being sufficiently engaged. Darn millennials not taking responsibility

Mora’s certainly allowed to criticize Rosen, but he makes a blanket statement about a group of people and then proceeds to blame Rosen for the exact thing which Mora was paid handsomely to do. https://t.co/C4biVk6TVy

Would love to know how this is a “millennials” thing when Patriots OC Josh McDaniels essentially told @AlbertBreer the same thing about Tom Brady. If coaches are afraid of being challenged intellectually it says more about them than the player. https://t.co/5FiewBzFFu

Even Peter King seems taken aback by the whole thing, and when your behavior is such that even Peter King is thinking critically about it, that says something:

Rosen, by the way, got an explanatory text from Mora before Mora said his piece on air, but I’m told Rosen still was stunned by what his coach and neighbor said on TV. (Rosen lived in the same L.A. neighborhood as Mora, and he is friendly with Mora’s daughter.)

I have never heard of anything like this, even with the Giants/Jets note following what Mora said first.

The only possible explanation that makes Mora look anything close to good is that he’s trying to keep Rosen out of Cleveland, which is both hilarious and yet somehow plausible. But even then, there are better ways to do it, including a few that don’t make you sound like an idiot.