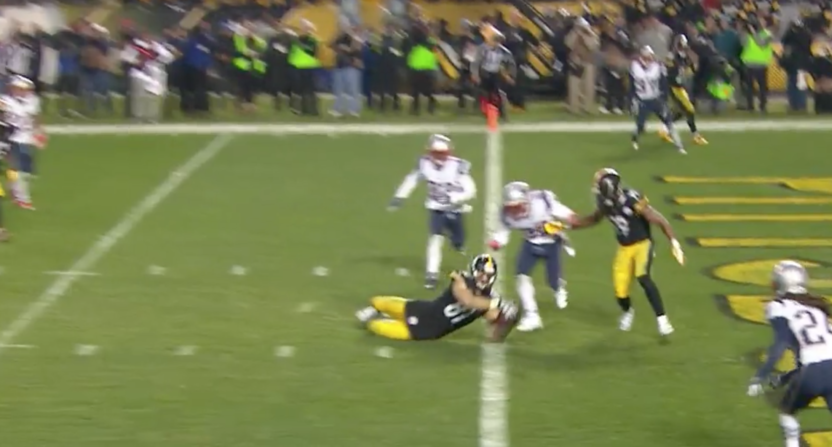 In the final seconds of the Patriots-Steelers showdown Sunday, Pittsburgh tight end Jesse James caught was appeared to be a go-ahead touchdown, before the call was overturned upon review, in the latest example of the NFL’s bizarre and counterintuitive catch rule.

The play, which according to the rules of common sense was clearly a catch, confused many spectators, including Jim Nantz and Tony Romo, who were calling the game for CBS.

When James first dived across the goal line, Nantz and Romo, like the rest of us, thought Pittsburgh had scored. The first two replays did not change the commentators’ minds.

Romo: This is going to stand, unless he got touched.

Nantz: Oh he’s in. He never got touched.

Even after the referees initiated a review, Nantz and Romo failed to catch on, apparently thinking they were looking to see if James was down before the goal line. Watching yet another replay, Nantz commented, “I don’t know why this is taking so long to review because clearly Harmon is nowhere close to him.”

Around this point, fans began wondering why the commentators were so slow on the uptake.

The definition of a catch is so hard to grasp that it took Nantz and Romo about two minutes after the touchdown before they even realized that was what the booth was reviewing.

I'm a casual viewer, so maybe I just don't know the rules that well. But I don't know how Nantz/Romo are so sure that's a TD.

Of course, you can argue Nantz and Romo’s confusion was less their fault and more the fault of a silly rule.

The fact that Nantz and Romo were so sure for so long that was a TD just shows how absurd and broken the catch rule is. What are we trying to do with this thing if plays like that don't count?

Nantz and Romo eventually caught on to the question at hand: whether James maintained possession as he fell to the ground.

By the time the call came down, Nantz and Romo had recognized that James did not necessarily complete the catch. That didn’t stop them from sounding surprised when the call was overturned.

We can’t fault Nantz and Romo too much for being a bit slow on this one given how messy the catch rule is and how hectic the end of that game was. Still, it was jarring to see a duo known for seeing the future finish last on this one.