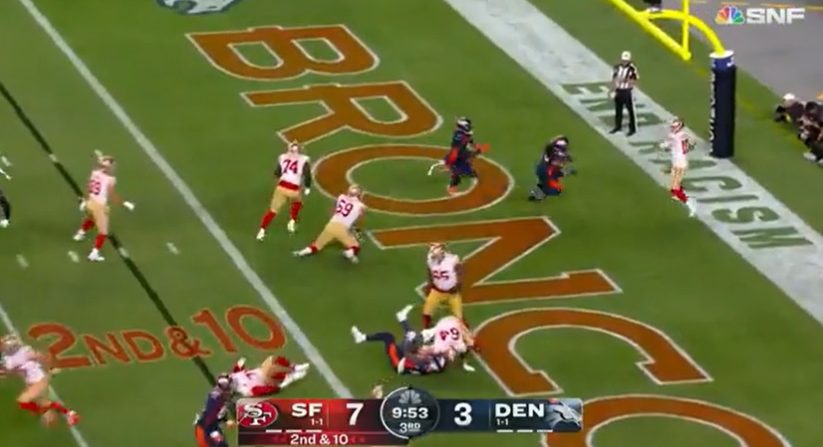 After a sluggish first half offensively, the Denver Broncos needed a spark. They got one, thanks to a blooper reel play from San Francisco 49ers quarterback, Jimmy Garoppolo.

A great punt from Denver’s Corliss Waitman pinned the 49ers back against their own goal line. On second down, Garoppolo dropped back to pass. With two Broncos bearing down on him, Garoppolo took another step back before throwing the ball. In doing so, Garoppolo made two errors.

He threw the ball right at Denver’s Bradley Chubb. Ordinarily, it would have been an interception and a touchdown for Chubb. Only, there was one other problem that occurred just before Garoppolo threw the ball. When he stepped back for a second time, he went out of his own end zone for a safety.

Of course, this naturally brought back memories of Dan Orlovsky’s safety in 2008, when he was quarterback for the Detroit Lions and ran out of the back of his own end zone in a game against the Minnesota Vikings.

Orlovsky himself weighed in on the matter.

He was not the only one. Several people watching the game had interesting commentary to offer on Garoppolo’s gaffe.

Dan Orlovsky after watching Jimmy G step out the back of the end zone 🤣😭 pic.twitter.com/HNkqG4UzkF

In an even stranger twist, the safety worked out incredibly well for the 49ers. Had Garoppolo’s pass stood, it would have been a Denver touchdown. The Broncos, of course, got possession of the ball after the safety and could have had a touchdown on top of the safety, but that’s not how it worked out. Denver did get into field goal range, but Brandon McManus missed a 53-yard field goal.

So the Broncos not only lost a net of five points with the safety but the good field position the 49ers got from the missed field goal enabled them to flip the field position battle when San Francisco punter Mitch Wishnowsky pinned the Broncos at their own four-yard line.