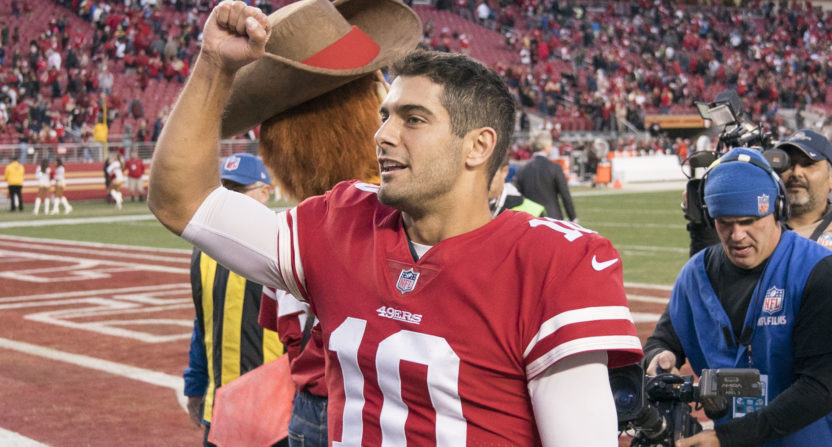 San Francisco 49ers quarterback Jimmy Garoppolo has a whole lot of reasons to root for the New England Patriots during these playoffs. 163,000 reasons, in fact. As Joel Corry spells out in a piece for CBS Sports, Garoppolo and others traded midseason will get playoff checks from their old teams, and those checks rise based on how far the teams advance.

Because of the way playoff money is allocated, Garoppolo will get $163,000 if the Patriots repeat as Super Bowl champions.

…Players who receive the full amount

Garoppolo’s potential $163,000 is because of the last category. He was with the Patriots for eight games before the trade. His current 49ers teammates Cassius Marsh and Sheldon Day, both defensive lineman, are in the same situation. Marsh played in nine games while with New England before he was released. Day was with the Jaguars for 10 games before his release. Others in line for full payment under the fourth criteria because of a conference championship or Super Bowl appearance by former teams include free-agent defensive tackles Roy Miller and Jerel Worthy, because of time spent this season respectively with the Chiefs and Bills.

Wide receiver Kelvin Benjamin has a chance to receive payment from two different teams in the playoffs, also because of the final category. He will be getting at least $26,000 for being on the Bills. He played eight games with the Panthers before being traded to Buffalo. Tight end Clay Harbor was the only player to collect playoff money from two teams last year. He was briefly with the Super Bowl champion Patriots before joining the Lions, who were eliminated in the wild-card round.

Garoppolo has a maximum of $163,000 coming his way from any potential Patriots’ success, as the team’s first-round bye means their players won’t be collecting checks for the wild-card round ($28,000 for division winners, $26,000 for wild card teams). Players in the divisional round (and former players on those teams) will all receive $28,000. Players in the conference championship will get $51,000 each, and Super Bowl winners will get $112,000, while those on the losing team in the Super Bowl will get $56,000. So there’s a fair amount of money out there for the likes of Garoppolo based on what their former teams do. (And it’s nice that they got traded across conferences, as otherwise, they wouldn’t be pulling in these checks.)

The case of Benjamin is perhaps even more interesting, as he can wind up making more money from the playoffs than anyone else. If the Bills and Panthers both wind up on a run and meet in the Super Bowl, he can collect from both teams, making $217,000 from Buffalo and $161,000 from Carolina if the Bills win that final game. Not bad. Of course, as with most veteran players, the playoff checks aren’t close to what Benjamin would regularly make (he’s set for a base salary of $8.46 million in 2018), but still, he’s set up to potentially collect on both sides. And while many players may not be happy overall with their former teams, they have at least some financial reasons to root for them.