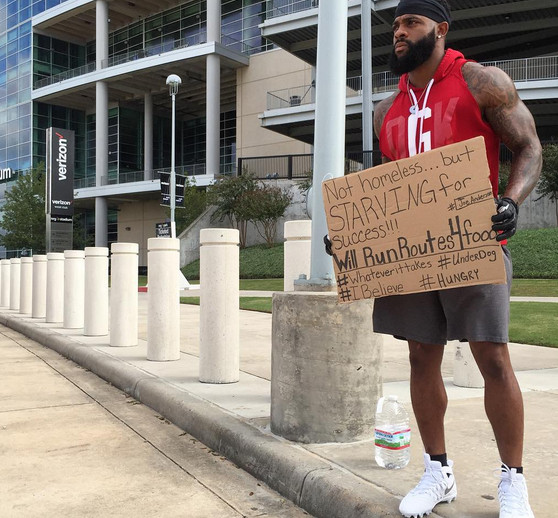 There are plenty of NFL players signed via unconventional ways these days, from checking in with old coaches on social media to tweeting highlight film at teams to attending open pay-to-play tryouts, but the story of newly-signed New York Jets’ receiver Joe Anderson might be the most unusual yet. Anderson went undrafted out of Texas Southern in 2012, posting 47 receptions for 638 yards and four touchdowns in his senior year in 2011, but he signed a three-year deal with the Bears that offseason. He played in just nine games with Chicago from 2012-13, though, mostly on special teams, and signed with Philadelphia in 2014, but didn’t play much thanks to injuries.

Then, this fall, he posted an Instagram picture that went viral; himself standing outside the Houston Texans’ stadium, holding a “WillRunRoutes4Food” sign:

#NothingWillStopMe Lord it’s all in your hands, all I know is that I believe it by faith and see it all happening even when it looks like a joke before the eyes of man! I fill myself with humility and say let your Will be done and use me to allow others to believe in your power!!!! Im not looking at my situation with a worldly mindset and that’s what’s gonna seperate me my hunger can’t be matched my heart can’t be compared too, I’m outside the Houston Texans facility every morning, because I kno what type of gift God has blessed me with!!! A lot of people don’t really live out the meaning #WhateverItTakes they just sayin it!!! You gotta really live that junk if you say it and believe in yourself and trust in the Lord, and living it don’t just mean hold up a sign!! Oh there is much pain behind holding this sign an it’s not from bein doubted or the underdog, like how bad do you really want it?? Forget a publicity stunt Boyz is Really HUNGRY out hur dawg to the point if the coach wanna line up I’ll route him up too, to the point if it’s special teams an the REF get in the way I’ll hit him too!! It’s something flickering in my head everyday with much Humility and WILL power to go the extra mile when it come to believing in myself and proven all doubters wrongI’m not just chasing greatness for myself/family but for all the people that lack faith and wanna quit and don’t believe God still moves, DAWG if you gotta DREAM GO GET THAT!! Let ZERO What If’s stand in the way go to the grave on E, not off what someone told you you can’t do…Create and tell your testimony don’t be ashamed of it, do it all for the glory of the kingdom take yourself outta the picture I’m out here on FAITH, it’s bigger than just collecting a check to me straight up! The way I do what I do and why I do what I do isn’t just to score touchdowns and gain fame that’s far from the case I don’t need all that cause I’m already famous in spirit an you can’t get no famous than that, when I get my shot you’ll see what the Lord is truly about to do in my life and I pray wit all my heart it inspires you to never Give up.When your purpose means more than your situation God will give you favor #TAGandREPOST

Anderson’s approach is certainly novel but NFL teams aren’t signing guys to the practice squad just because of signs. However, the advantage of a stint like this is it can put forgotten players back on the NFL’s radar and get teams to check out their highlight tape. Here’s Anderson’s tape from college:

It’s worth noting that this doesn’t mean Anderson’s on track to a sure-fire NFL career. Players are signed to and released from NFL practice squads all the time, and many of them don’t stick in the NFL. Many bounce back and forth, too; a fascinating example is Chris Matthews, who went from CFL rookie of the year to cut by the Seahawks to working at a Foot Locker to a return to the Seahawks and a starring performance in last year’s Super Bowl, and then was cut again this November before being signed to Baltimore’s practice squad. Glory is fleeting, and even if Anderson is able to make the Jets’ active roster, that doesn’t ensure a long NFL career. However, regardless of where he goes from here, this is certainly a step up from holding a sign in a stadium parking lot.