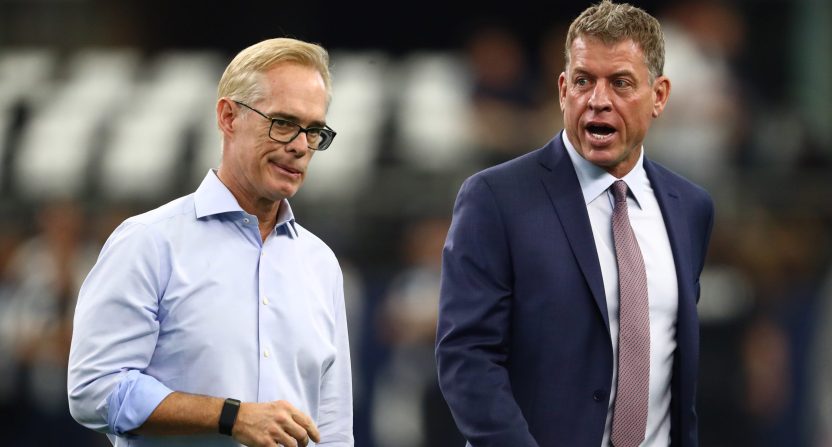 With reports that Troy Aikman may soon be leaving FOX for a job at ESPN, a common sentiment was that for better or worse, it would be weird to have Aikman paired with anyone other than Joe Buck. Those sentiments might have been premature.

On Thursday, news broke that in addition to Aikman, ESPN is also trying to land Buck.

Buck isn’t someone that you’re going to find a lot of neutral opinions on. Give an NFL or MLB fan your opinion of Buck and chances are you’ll be in a (potentially heated) discussion for a while.

On that note, the possibility of Buck moving to ESPN was exciting for some.

This would be a huge power move from ESPN. I don’t care what ya’ll say on this app, Joe Buck is really good at what he does. https://t.co/PvlvGkZJH7

Man, if ESPN could snag Joe Buck to go along wid Troy Aikman for Monday Night Football, that would be yuge for them. https://t.co/U6U8VMc0Th pic.twitter.com/m0NPEzEdWP

For others, not so much. Even there, though, the idea of getting Buck away from his current jobs was intriguing.

Yes please get Buck away from FOX so that a new fresh, young voice who actually loves baseball can call the World Series https://t.co/PgRDqBdwUu

If this gets him off the World Series, I am all for it https://t.co/gNf8cip0De

FOX’s contract with MLB lasts through 2028. If Buck were to go to ESPN, he’d either have to work out a special arrangement to continue calling games or stop altogether. Given that he has called every World Series since 2000, as well as both 1996 and 1998, leaving that behind would be a big deal.

I think it would be hard for Buck to give up the World Series. https://t.co/DtNK1ZhEbz

It is worth noting that special arrangements have been reached between the two networks. Alex Rodriguez, for example, is a part of ESPN’s Sunday Night Baseball broadcast as well as FOX’s pregame shows.

Buck’s history in baseball did raise another interesting question. What could he do to help ESPN’s MLB broadcasting?

If and it's a big IF ESPN could get Joe Buck they would be able to tackle their baseball booth and football booth in one swoop.

Neither Buck nor Aikman are signed to ESPN yet. So, a lot needs to happen before people start getting overly excited about what either going to ESPN might mean.

But given the broadcasting dominos that could fall, the coming weeks will be an interesting time of speculation for sports fans.