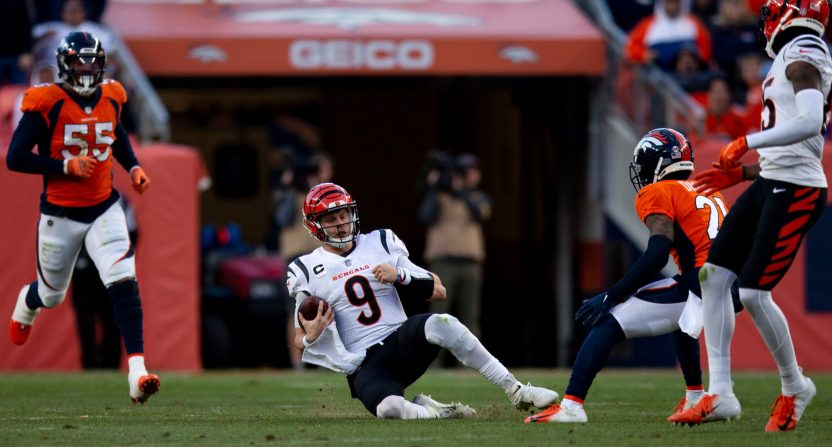 Kirk Herbstreit caught a lot of heat last weekend when he said “I think this era of player just doesn’t love football” to punctuate the rise in college football players who opt out of bowl games in order to avoid injury and prepare for the more important NFL draft.

By that logic, Herbstreit must think Cincinnati Bengals quarterback Joe Burrow doesn’t love football either now that he’s said he won’t play in Week 18’s game against the Cleveland Browns despite being capable of doing so.

Joe Burrow says he does not plan to play Sunday. It is not because of his knee.

Knee is "sore but not bad, I could play if I needed to."

Burrow and the Bengals clinched a spot in the playoffs but there’s still something to play for. However, given Burrow’s knee injury and a desire to make sure he’s as healthy as possible for those win-or-go-home games, it makes sense to have him sit out this one.

In theory, the Bengals could still earn the No. 1 seed in the AFC, which comes with a first-round bye. However, for that to happen, they’d have to not only win this weekend but the Titans, Chiefs, and Bills would all have to lose, which seems very unlikely given who those teams are playing.

The smart move remains to let Burrow rest, avoid further injury, and think long-term, just like what those college football players who opt out of bowl games do.

Given the circumstances the recency of Herbstreit’s comments, however, a lot of NFL folks had fun with the situation at Kirk’s expense on social media.

I think it clear: joe burrow does not love football. https://t.co/9zIHYKgfS4

Is that how this works? https://t.co/W7UJJFro83

He clearly doesn’t love football obviously or else he’d play in a game with little impact on the standings https://t.co/WQ8BpFTtoh

I guess he just doesn't love football enough. Where's KH when you need him? https://t.co/3BAXyxJ9tW

He must not really love football if he’s sitting out this game with no meaningful season implications, eh @KirkHerbstreit? https://t.co/pZbzxjQuQA

In all seriousness, if the Bengals do lose and they end up with an unfavorable matchup, there could be some talk about whether or not this was the right move. But chances are, most people will agree that looking ahead to a game that matters is worth resting during a game that really doesn’t.