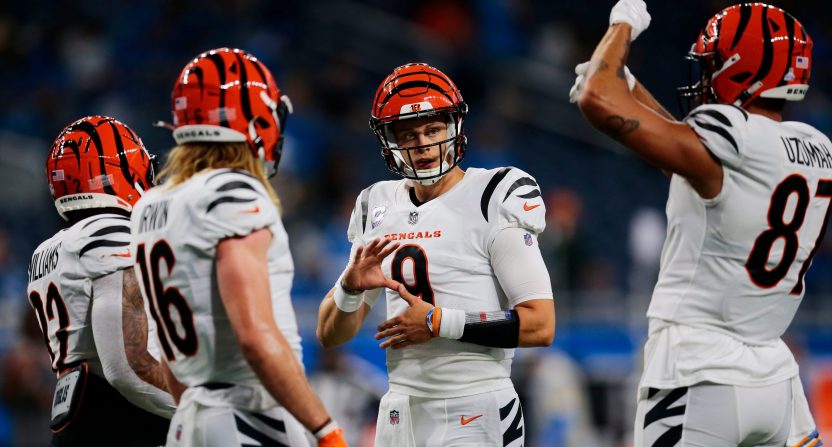 Don’t look now but the Cincinnati Bengals are 4-2 and appear to have things on the right track this NFL season.

This weekend, the Bengals took down the Detroit Lions, 34-11, thanks to a big performance by quarterback Joe Burrow, who threw for 271 yards and three touchdowns. The offense was complimented by Joe Mixon, who ran for 94 yards as well. Meanwhile, the defense shut down Detroit’s offense, limiting them to 36 yards rushing total.

Burrow also made some history. By throwing for at least two touchdowns for the sixth time this year, he became only the second first- or second-year quarterback to ever throw for 2+ scores in each of his first six games in an NFL season.

The Bengals enter the upcoming week in second place in the AFC North, just one game behind the Baltimore Ravens. They’ll have a chance to tie them for the lead when they play them this weekend.

According to Burrow, what we’ve seen out of the Bengals so far isn’t even them at full speed. And if that happens, it could get “scary” for the rest of the NFL.

“If we eliminate some of those things that happened in the first half, we probably score 50 points today,” Burrow said, via the Bengals website. “But it’s the NFL. I’m never going to be upset about a 34-point game when you’re winning by as much as we did, but we do have to get some things corrected. And when we do that, it’s going to be scary.”

The Bengals have to be excited about having a healthy Joe Burrow and an offense surrounding him that compliments his abilities. So far, he’s thrown for 1,540 yards, 14 touchdowns, and 7 interceptions. If he and the rest of the team can button up their issues, he could very well be right and we might be about to see the Bengals actually make a run.