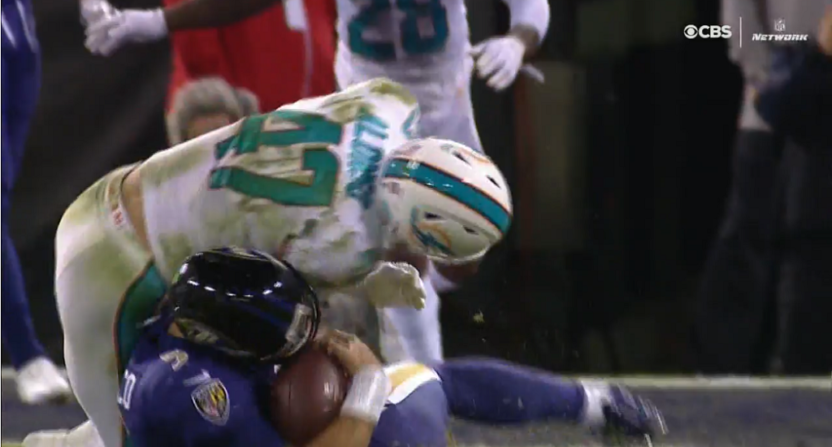 Flacco was trying to reach the first-down marker on 3rd-and-10 in the second quarter, when he went sliding to the ground and then took a brutal hit to the head from Alonso. Flacco’s helmet went flying off, and he got up shocked and dazed. Ravens coach John Harbaugh was understandably furious and came out to yell at Alonso.

As CBS/NFL color commentator Tony Romo said, “This is not okay.”

Here’s another look at the hit and the chaos on the field that followed:

Alonso was given a 15-yard penalty, but was allowed to stay in the game, and that drew plenty of reaction on Twitter.

The league is full of crap. Alonso’s ass should have been ejected. That was intentional and to the head!! #Ravens Get his ass!!!!!

Bad look for NFL in nationally televised game that Alonso is still playing while Flacco got head taken off. Exactly what trying to avoid.

When is NFL going to eject guys like Kiko Alonso for kind of flagrant hit he just put on Joe Flacco? Headhunting in head injury sport

How Kiko Alonso is still eligible to play this game, and not ejected, is beyond me.

Kiko Alonso just proved you cannot get ejected from an NFL game.

Unless you touch an official. Then you're suspended for a week.

How do you not eject Alonso for that?

Absolutely low-down, dirty shot by Kiko Alonso. No place in the game for that. Should have been ejected.

Alonso gotta get kicked out and suspended for that.

Not sure why Alonso is still in this game.

Holy cow that was a dirty hit by Alonso. Should be immediate ejection

Even though Alonso was allowed to stay in this game, look for the NFL to issue a suspension for the linebacker.

Ryan Mallett is in at quarterback for the Ravens, who take a 20-0 lead into the second half.

UPDATE: Flacco officially has a concussion and also needed stitches to his ear that was left bloody after the hit.