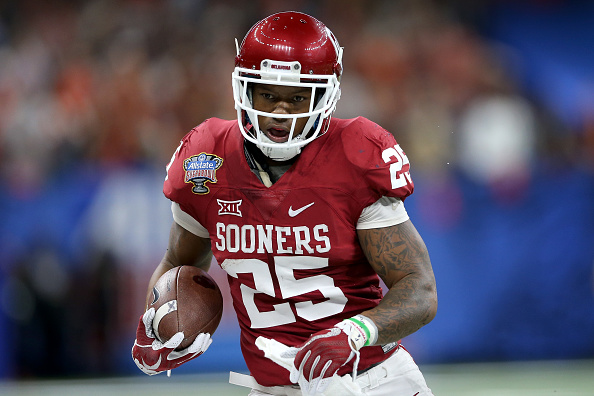 Joe Mixon has largely been defined by one stupid, horrific, and inexcusable action ahead of his first year at the University of Oklahoma. No matter what he did on the field, his punch to the face of a girl at a local eatery followed him.

It will now likely be something that follows him to the NFL Draft process, as Sports Illustrated reports Mixon is going to declare for the NFL Draft.

We know of one person outside of Mixon’s family who is as pleased as anyone else in the country to hear this news — Brent Musburger, of course.

You know, the man who awkwardly wished Mixon a bright NFL career and then went off on his critics in the space of the same football game he was covering.

Mixon had one heck of a career on the football field at Oklahoma, after coming in as one of the most highly-touted running back recruits in the country. He was the No. 1 all-purpose back and the No. 21-ranked player in the country for the 2014 recruiting class.

Since arriving on campus, Mixon has put up 1,963 yards (1,183 of them this season) and 15 touchdowns. He did that while splitting time with Samaje Perine, who has also declared for the NFL draft following his junior season this year.

No doubt Mixon will be looking to put his off-field history to bed leading up to the NFL Draft, but it’s hard to see today’s harsh world forgiving or forgetting what took place that fateful August night in 2014.

After all, that’s what Twitter is all about — being negative and not letting people forget their transgressions in life, right? (Oh wait, it’s not supposed to be just about that?)

On the field, Mixon left it all out on the field in his final game. He scored two touchdowns and racked up 180 total yards as the Sooners won the Sugar Bowl over Auburn on Jan. 2.

Now the bigger question- will any NFL team take a chance on drafting him given the video and the NFL’s horrible history with violence against women?

ESPN’s Jake Trotter spoke with Mixon, and Mixon was told that he was given a first-round draft grade:

Just got off phone w/ Joe Mixon. Said he got a 1st round grade. Flew to Norman today to tell coaches his decision. More on ESPN to come

Even with that, Bleacher Report’s Mike Freeman reports that sources are “insisting” no team will draft Joe Mixon:

So, for now teams are acting as though Mixon will not be selected, but consider us skeptical until the draft concludes in late April.