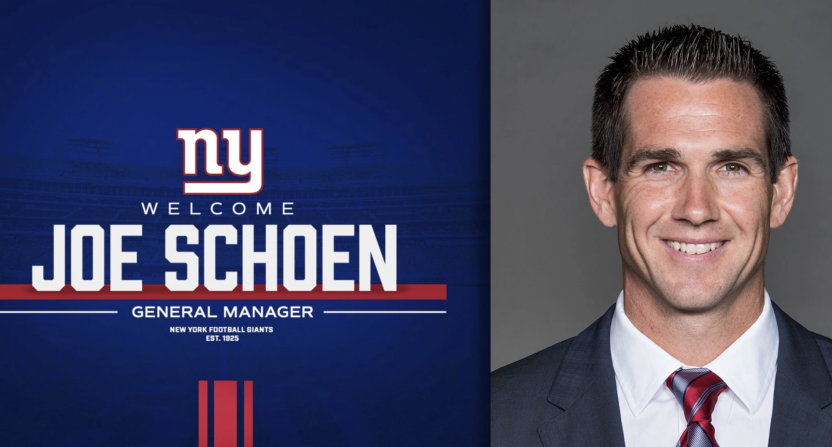 “We are pleased and proud to name Joe as our general manager,” said Giants president John Mara in a team statement. “Throughout our search, Joe impressed us with his ability to communicate a progressive and comprehensive vision for our team. His philosophy and collaborative approach to building a roster and coaching staff align with what we were looking for in a general manager.”

Schoen (pronounced “Shane”) joined Buffalo in 2017 and has played an outsized role in helping the franchise become a perennial division champion and playoff contender. The move represents just how much the Giants’ owners are looking to change the culture as it’s the first GM hire outside of the organization since 1979.

Joe Schoen calls it "an honor'' to be named GM of the Giants.

The big question now is who Schoen will want to hire as his head coach. The Giants fired Joe Judge a couple of weeks back and are looking to reset their culture as they try to regain a foothold in the league following many disappointing seasons. The most obvious candidate at the moment is Brian Daboll, the Bills’ offensive coordinator. And while Mara told reporters last week that he wasn’t looking for a package deal in a GM and coach pairing, that duo would make a lot of sense for instant continuity.

In the meantime, there were plenty of reactions around the NFL world, especially from Giants fans, regarding the news.

First big hire of the NFL jobs cycle is on the board. https://t.co/NM5IapBfAq

Damn. Losing Schoen is a tough blow. Getting Gaine back eases the blow a tad, but this is a great hire for the Giants. This of course, is dependent on him getting the autonomy to clean house and rebuild the right way. Oh, and Daboll is as good as gone. https://t.co/z4AmD69UGq

Giants fans be happy, actually elated, for the hiring of Joe Schoen. First step in changing culture there

The quotes I've got from co-workers and those who know Joe Schoen around the league:

Of course, it all comes down to wins and losses, but in the meantime, there is hope in the Giants organization once more.