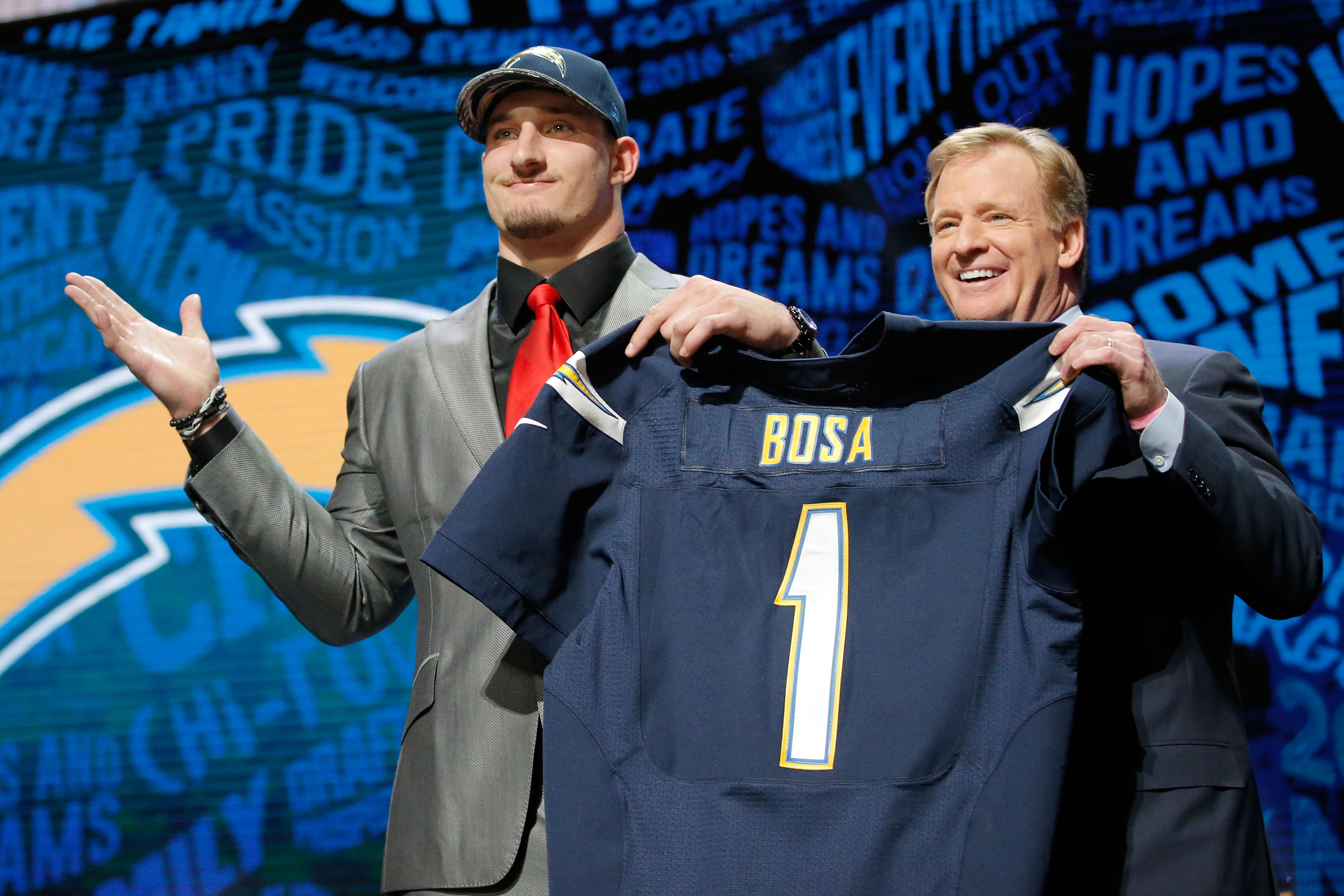 Joey Bosa may have been the third player selected in the 2016 NFL Draft, but he’s currently the only member of the rookie class yet to sign his contract.

Drafted by the San Diego Chargers to help boost a flailing defense, Bosa’s current unsigned status has kept him off the practice field throughout the offseason. Once a 3-4 defensive end at Ohio State, he’s expected to make a transition to defensive end in the Chargers’ 4-3 system. When that will happen is anyone’s guess. Bosa continues to hold out with the Chargers — making two minor, but still ridiculous contract demands — and the resolution currently appears to have no end.

Bleacher Report’s Jason Cole confirmed what many outlets have been reporting for days: That the Chargers and Bosa’s camp have not negotiated the contract since July 28.

As of this morning, there still hasn't been any contract talks between the #Chargers and Joey Bosa since July 28.

The sticking points: Offset language and the timing of the payout of his signing bonus. The Chargers want Bosa to divide his signing bonus over the first two years of his contract, rather than paying it in its entirety in 2016. They also want to add offset language to the deal in order to protect themselves. Bosa, meanwhile, will accept one of these terms but not both.

Offset language may be the most confusing of these two areas of dispute. Essentially, it is another wrinkle that applies only to players drafted in the first round. For first-round picks, every player has a fifth-year option built into their contracts that teams can decide in a later year to pick up. If they do not, however, their rookie deals are four-year contracts. But if a team wanted to move on prior to year four—or thought such a thing was a possibility upon drafting him—they can add offset language that is intended to prevent the player from double-dipping on salary.

Assuming Bosa was to make $3 million in guaranteed money in the fourth year of his contract, if he’s released from the Chargers without offset language and then makes at least $3 million for that year from another team, he receives San Diego’s money and the money from his new team. Adding offset language means that if Bosa gets at least $3 million from his new team, the Chargers would no longer be on the hook for the money they had initially guaranteed him.

There were mechanisms put in place in the 2011-2012 Collective Bargaining Agreement designed to virtually eliminate rookie holdouts. Draft picks, particularly first-rounders, essentially have their full salaries, guaranteed money, and bonuses prescribed before they are ever selected. As such, Bosa should get a salary just north of $25.8 million, with over $17 million of that in a signing bonus and an expected 2016 salary cap hit of $4.7 million. But add into this these tiny-yet-massive details regarding the timing of said bonus and the Chargers’ desire for offset language and the two sides are currently unwilling to agree.

Standoffs over offset language haven’t happened since 2011, when St. Louis Rams’ defensive end Robert Quinn waited until July 30 to get his contract finalized. But Bosa isn’t the only recent high draft pick to be faced with split bonuses and offset languag, he’s just the only one to quibble over it. Former agent Joel Corry noted that Jadeveon Clowney, the Houston Texans’ No. 1 overall pick in 2014, has both a deferred bonus and offset language, and the No. 1 pick in 2015, Tampa Bay quarterback Jameis Winston, also has agreed to the same situation. So the Chargers do have recent precedent informing their desire to stand firm in their requests.

At this point, however, things have gone beyond money and are starting to get personal. For one, the lack of contact between Bosa and the Chargers that has spanned well over a week at this point means bad blood is simmering. Additionally, Bosa’s mother, Cheryl, is now taking to social media to say that she “Wish[es] we pulled an Eli Manning on draft day,” referring to the 2004 NFL Draft when the Mannings were able to get the quarterback sent to the New York Giants after initially being selected at No. 1 overall by the Chargers.

This hurts both Bosa and the Chargers. Ostensibly, San Diego selected Bosa with their first-round pick to bolster a defense that ranked 21st in points allowed, 20th in yards allowed and 24th in sacks in 2015. But now Bosa hasn’t participated in training camp and is on pace to miss at least one, if not all four, of the Chargers’ preseason games, given that he is so behind in learning a new defense and new position. Even if San Diego and Bosa can come to an agreement in a week, that still may not give him enough time to be an impact player, let alone a starter, for the beginning of the regular season. In effect, Bosa and the Chargers are hurting both themselves and each other over sticking points that should not have been so controversial or difficult to navigate.

Trading Bosa is no longer an option. If the Chargers and Bosa stay so entrenched in their differences into the regular season, Bosa could potentially not play at all this year—the two sides have until the Tuesday after Week 10 or else his rookie year will be officially wasted.

It shouldn’t have been this complicated to begin with, but at some point either Bosa will have to agree to both the offset language in the fourth year of his contract and a divided up signing bonus, or the Chargers will have to relent on one of these two demands. When that day will come is anyone’s guess, but at this point, “soon” seems to be off the table.