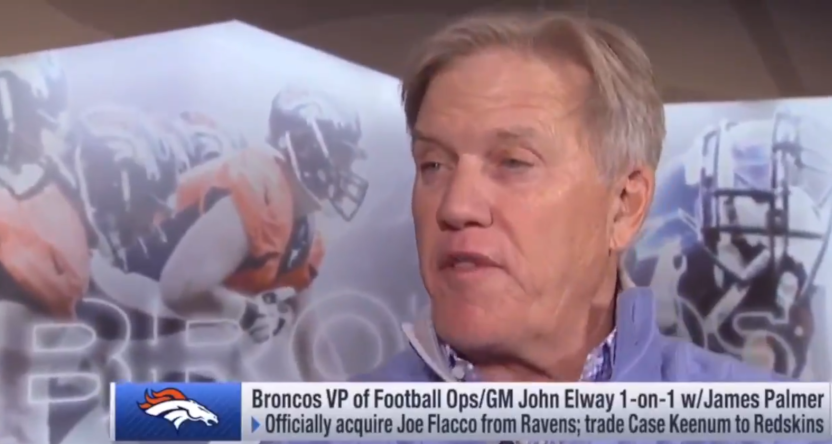 It turns out it’s not just Stephen A. Smith who can make ridiculous NFL statements. Denver Broncos’ general manager John Elway did a bit of that this week, arguing to James Palmer of NFL Network that the team signed Joe Flacco because “at 34 years old, we thought he was just going into his prime” and “he’s played under the center,” unlike those shotgun-happy kids these days! The latter claim is at least a bit exaggerated, especially when it comes to what Flacco did last season:

Elway’s 1st stated reason for wanting Flacco was “he plays under center.” He doesn’t like college QBs because they “play a lot more in shotgun.”

Why the irrational shotgun hate? pic.twitter.com/FteYyeDYSv

And while you can argue that Flacco spent less time under center than your average NFL quarterback before that, he still was spending a majority of snaps in the shotgun. While there are plenty of media who still trot out the “play under center” talking point to criticize players like Kyler Murray, it’s quite bizarre to have an NFL general manager doing that, someone who theoretically should have an idea how much shotgun NFL teams actually use.

Oh, and “at 34, we thought he was just going into his prime”? That’s pretty inaccurate as well. Yes, there are a few good older quarterbacks like Tom Brady and Drew Brees, but as Joe Mahoney wrote at SB Nation Broncos’ site Mile High Report last September, only eight of 32 season-beginning NFL starters last year were 34 or older. And in September 2017, Mahoney did an extensive analysis of NFL quarterback performance by age, and concluded that the likes of Brady were much more exception than rule:

It’s exceedingly rare for NFL QBs to still be starters after the age of 40. In fact if you use the age of 36 as your cutoff, there are very few instances of a QB who is over 36 starting 15 or more games in a season.

And as per peak, Chase Stuart wrote a Football Perspective analysis in 2013 suggesting that QB peak happens much earlier than 34:

Quarterbacks peak at age 29, although the five-year period from 26 to 30 is probably better classified as the prime of a quarterback’s career. For elite quarterbacks, like Peyton Manning and Tom Brady, the curve is obviously much flatter; for the worst quarterbacks, the curve is just as surely steeper.

…On the other hand, this doesn’t account for the Brett Favres of the world, who played well at age 40. If anything, the number of quarterbacks with enough attempts to qualify at each age might be the most revealing piece of information in the above table. The peak is again at age 29, with ages 27 to 31 looking like the prime.

Yes, there have been quarterbacks who have shone in their late 30s, from Favre to Manning to Warren Moon. But that isn’t really a common result, and it’s quite strange to suggest Flacco (who put up a quarterback rating of 84.8 in nine starts last year, 28th in the league, before losing his job to Lamar Jackson) is “just going into his prime.” But hey, Elway also claimed Flacco was “a perfect fit for what we want to do” in comments to Mike Klis of 9 News:

“Well, it’s hard,” Elway said in an interview with 9News. “We looked at what we want to do offensively — try to get the ball downfield. And the availability of Joe and the success he’s had as a starter and in the playoffs, he won a Super Bowl, he’s been a starter for a long time.”

“He’s only 34 years old so we think he has a lot of football ahead of him. I thought he would be a perfect fit for us.”

And Elway told Mark Kiszla of The Denver Post they’re “getting Flacco at the right time” because…he did well with offensive coordinator Gary Kubiak, who left the Broncos for the Vikings this offseason?

“I think we’re getting Flacco at the right time,” said Elway, attracted to a 34-year-old quarterback that wants to prove he’s not done yet. “He’s got a chip on his shoulder.”

…“Even though he hasn’t had all the flashy stats lately, the best year he had was when he was with Gary Kubiak, when Gary was there (as Baltimore’s offensive coordinator in 2014). This is pretty much the same offensive system in Denver, except it has evolved.”

Alrighty then. Look, there are some arguments for the Flacco move; mostly, he has no guaranteed money left on his deal, so this isn’t a long-term commitment. And if Flacco magically becomes a better quarterback in Denver than he was in Baltimore, great. There’s downside here too, though, as this means the Broncos are likely passing on getting a younger quarterback with a higher upside through the draft (at least, they appear to be passing on getting a prominent younger quarterback; maybe they’ll add someone in a later round). But hey, all those college kids just play shotgun anyway, unlike Joe Flacco.