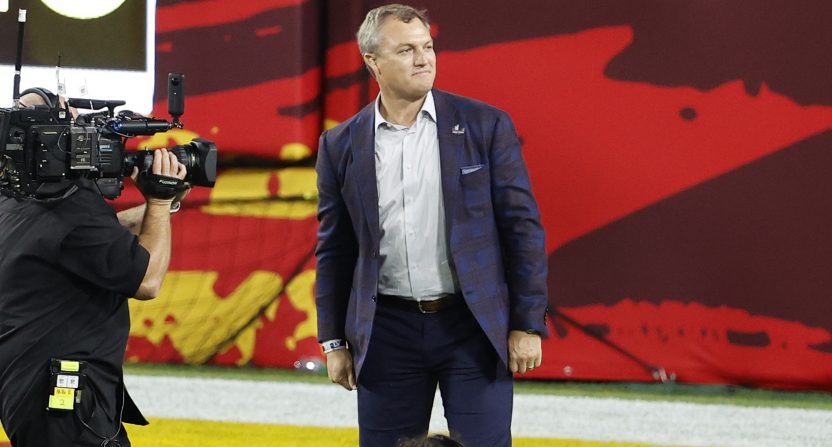 We haven’t heard much from Jon Gruden since he resigned as head coach of the Las Vegas Raiders following the release of emails with racist, homophobic, and misogynistic comments.

Gruden told a Real Sports producer that “the truth will come out” but so far we haven’t seen too much to make people think how Gruden spoke in those emails doesn’t represent who he is. One current Raider talked about how much calmer it was without him there while a statistical analysis shows how the Raiders shed Black players from its roster under Gruden.

While we wait for that truth to come out, we do have the word of John Lynch, current San Francisco 49ers general manager and former Tampa Bay Buccaneer player when Gruden coached that team to a Super Bowl victory. Lynch appeared on KNBR on Friday and shared some insights from a conversation he had with Gruden following the coach’s resignation.

“First of all, I’ll always be grateful to Jon,” Lynch said on the Murph & Mac show. “We won a Super Bowl together. So, thankful and grateful for that. Someone asked me if I was surprised. Sure, I was surprised because I didn’t know that to be his heart. And those things were … horrifying. That’s just not something I would think would come out of his mouth. And he didn’t just do it to one group of marginalized people; he did it to a whole host of them.

“I had the opportunity during the bye week, I reached out, and was surprised he actually called me back and had a good conversation. He feels a tremendous amount of remorse, as he should. And that’s what you do; you reach out to people and say, ‘Hey, I’m thinking and praying for you.’ And I simply said, ‘Hey, when you’re ready, give me a call,’ and he did.

“We shared some thoughts — I’ll leave that privately— but he is extremely remorseful and understands he’s got to make up for that however he can. And I think those are his actions. And that’s the only thing he can do at this point… I’ll leave it at that, but it was terrible, and he’s paying a price. Lost his job, and is in a lonely place right now, and feeling the consequences of those actions.”

Lynch, at least, doesn’t sugarcoat things even if he’s trying to provide some positive context for someone he considers a friend during a time when few people want to feel bad for him. There’s only so much that people will be able to say about Gruden but ultimately it’s going to have to come from him if he wants to change the narrative, if that’s even possible.