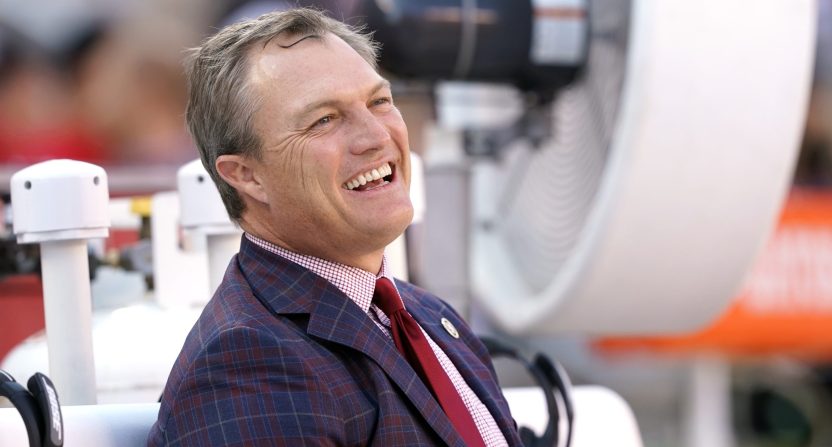 If Troy Aikman does leave Fox for ESPN, it’s going to create a need for a new NFL analyst in the booth with Joe Buck (assuming he doesn’t leave too).

The smart money appears to be on Greg Olsen, who is already Fox’s No. 2 analyst and has been long-rumored as Aikman’s heir apparent. There have also been a lot of rumors surrounding Los Angeles Rams head coach Sean McVay, who teased a move to TV last month. Former Saints coach Sean Payton has been thrown out there as someone Fox would love to have in the booth. And Payton’s longtime quarterback, Drew Brees, has also been a hot commodity in broadcasting circles, even if his breakout performance didn’t go well.

If you really want to look at outside-the-box candidates, consider San Francisco 49ers GM John Lynch. And the seeds for this one were planted back on February 1 when a reporter asked the Hall of Famer if he was considering a move to the booth.

“I have not heard that rumor,” Lynch said. “From time to time, opportunities are presented, and I can tell you, and tell everyone that my commitment right now is to this organization. We’re just coming off a season, but my commitment is to the 49ers, the York family, to Kyle (Shanahan).”

Fair enough, but PFT’s Mike Florio floated Lynch out there as a possibility. And while Andrew Marchand didn’t say the former NFL star was officially a candidate, he did say that “Fox will also wait if a mystery candidate, someone not apparent right now, arises. 49ers GM and ex-TV game analyst John Lynch could fall into this category for either Amazon or Fox.”

Whether or not Lynch, who previously worked as an NFL analyst for Fox, would consider a return to TV, there is plenty of discussion about the possibility on social media.

#Rams Sean McVay is more of a stunner but seeing #49ers GM John Lynch in here is noteworthy https://t.co/5a6MSBOMo5

Could John Lynch leave for Fox? Possibly join an ownership group looking to buy the Broncos? We are going to start seeing reports about Fox after Aikman Departure.

Crazy. A few weeks ago, Boomer Esiason suggested John Lynch could leave the 49ers for Fox if Aikman leaves. I doubt it but Lynch was in the number 2 spot as analyst in the booth at Fox. He was next in line if Aikman ever left. Just something to consider. https://t.co/zpGWjfKpSK

As a #Packers fan I’d love to see either Sean McVay or John Lynch leave their teams to go to the broadcast booth https://t.co/WlBvcXpUDI

The odds are against Lynch ending up back in a booth next season, especially when Fox has so many other options in-house or available to them. Besides, the 49ers are in a decent position to compete for Super Bowls and Lynch is at the forefront of trying to make that happen.