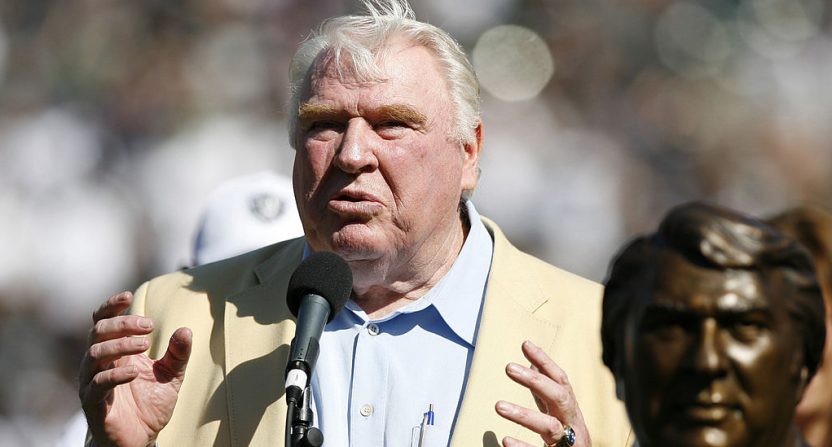 The football world is at a loss as one of the most influential people on the sport has died. In a statement from the NFL, John Madden died unexpectedly Tuesday morning at the age of 85.

Madden had so many successful careers within football that it’s difficult to really pinpoint his crowning achievement.

As a coach, Madden led the Raiders for 10 years in the 60s and 70s, winning Super Bowl XI and retiring at age 42 and never having a losing record. As a commentator, Madden’s voice accompanied some of the biggest games over a near 30-year span. Paired with Pat Summerall and Al Michaels, Madden called 11 Super Bowls and his enthusiastic and simple commentary style was revered by fans. As a video game developer, Madden brought sports gaming to a more legitimate level and for many, it was their first taste of football. There’s no telling how many people (especially kids) became football fans thanks to the Madden video game franchise.

These are just some of the many tributes and respects that have already been paid for John. Whether as a coach, a commentator, or as a figure in the gaming world, he meant a lot to so many people who are connected with football.

Today we lost a legend.

Take a look back at Hall of Fame coach and broadcaster John Madden’s iconic career. pic.twitter.com/P6MmCHsWnO

"Football has been my life, and it's given me so much."

Rest in peace to the legendary John Madden 🙏 pic.twitter.com/0XYD9FbXhF

John Madden passed away this morning, per the NFL.

An absolute legend. Hard to imagine anyone having a bigger, more wide-ranging impact on football. He was 85.

Madden was an inspiration. As a coach, an author, a broadcaster and of course the face of a legendary video game.

When I think of football from the 1990s, I think of John Madden before anything else.

This one really hurts.

RIP John Madden. A legend among legends! Your voice and your love of football will forever be immortalized. 🐐 pic.twitter.com/QFw9bfJpDA

So sad to hear this.
Such a fan of his-Growing up in my era it was Pat Summerall & John Madden on Sunday.
No matter who your team was-changed the game of how football games were broadcasted.
Legend as a coach and a broadcaster-My thoughts & prayers with his family & friends. 🙏🏼 https://t.co/wVKbWySrtF

NFL announces that the great John Madden has passed away.

Known as a coach to one generation.

A broadcaster to another.

A video game icon to another.

John Madden has passed away at the age of 85. Rest In Peace, John… pic.twitter.com/gW1N4rFprZ

RIP John Madden. A massive influence and an ambassador of the best sport to ever exist. A true legend. pic.twitter.com/pH91gEIH5B

We lost one of the best to ever Coach the game of football. A great man and a Raiders and NFL icon. Raider in Paradise, Coach John Madden. pic.twitter.com/ZKwWjYItLF