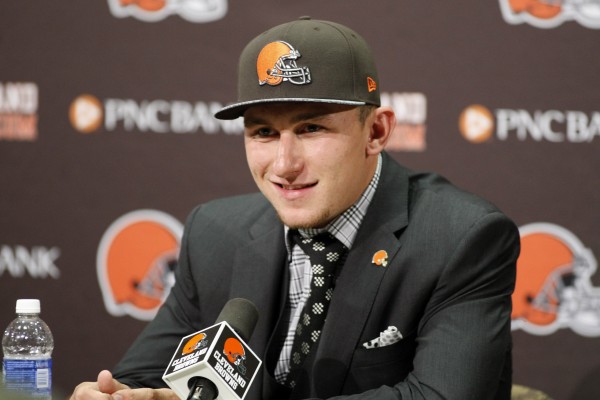 Johnny Manziel is in the midst of an NFL redemption tour that began earlier this year when he revealed that he was diagnosed with bipolar disorder and depression and had stopped drinking. He then announced he’d be joining the Spring League, a three-week scouting event in Austin, Texas where teams play two games each. He took things up a notch a couple weeks back when he took part in the University of San Diego’s pro day.

The 2014 NFL first-round pick stopped by The Dan Patrick Show on Wednesday morning. In the interview, he was brutally honest about the way he conducted himself in his short NFL career, as well as the things the Cleveland Browns did wrong with him.

Perhaps the most striking quote was Manziel admitting that, had the Browns actually done their due diligence, they would have known what a terrible idea it was to waste their first-round selection on him. He also noted that Cleveland certainly didn’t seem to know that their prized rookie quarterback might require a little hand-holding to adjust to the pros.

“If you would give me the mulligan, the mulligan would have had to come right after I got drafted,” he said. “I see successful guys in the NFL, and what they do in the offseason, and the time that they put in, that makes them good players. Yes, they’re athletically gifted, but guys are good in the NFL because they know film, they study hard, and they work even harder in the offseason. I didn’t know that.

“And I feel like … if Cleveland did any of their homework, they would have known that I was a guy that didn’t come in every day and watch film, I was a guy that didn’t really know the Xs and Os of football. I played in a spread offense. We looked at bubbles, we looked at flats, we had progression reads across the field; it wasn’t like it was a super-intricate pro system. So when I get to Cleveland, there’s a quarterback in the room with me that’s not helping me [presumably Brian Hoyer, who started 13 games that season]. And it’s not really his job to, but nobody was there really helping me go over the Xs and Os and it was hard. I struggled.”

"If Cleveland did any of their homework they would have known I wasn't a guy who came in every day and watch film. I wasn't a guy who really knew the X's and O's of football." – Johnny Manziel (@JManziel2) pic.twitter.com/7m2In1Z4JT

Manziel added that it wasn’t until Josh McCown showed up and took him under his wing that he started to understand what was required of him.

“The next year, when I got with Josh McCown, that guy was like, ‘listen: if you want to, you can come with me everyday. You can get here when I get here, you can leave when I leave, if you want to be good, just follow what I’m doing. I’ve been doing this for a long time, and there’s a reason that I’m still in the league this long down the road.’ Me and him got along great.”

Patrick interjected, “He’s a good dude. He really is,” speaking of McCown.

“He’s awesome,” Manziel said enthusiastically. “He gave me a blueprint, and that’s something that I still have to this day: he gave me a nice blueprint of what it takes to be a solid pro, and I’m very thankful to Josh and all that he did for me in Cleveland.”

It’s admirable for Manziel to own up to his mistakes and the issues that caused him to become one of the biggest busts in NFL Draft history. But will it be enough to get him back into the league? That’s a tough sell, even if NFL teams are always looking for quarterbacks to fill their roster (so long as they don’t protest).

Manziel has been flirting with the CFL as well in recent years. CFL Commissioner Randy Ambrosie issued a statement in December stating Manziel was eligible to play for the CFL’s Hamilton Tiger-Cats, however, no contracts have been signed. Stil, according to Johnny, the door is open for that as an alternative to an NFL job.

Johnny Manziel on @dpshow …
DP: There's still a chance you could still play in the Canadian Football League?
Manziel: Very much so.