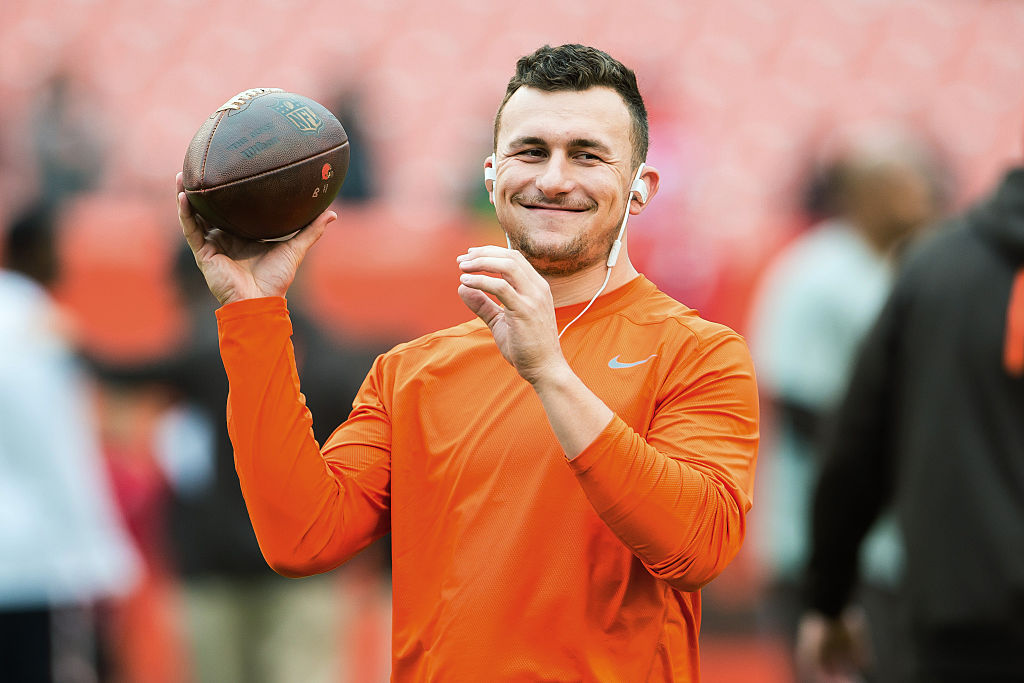 The NFL world has been so abuzz with a potential Marshawn Lynch comeback over the last week it nearly forgot about another, more infamous, figure who we definitely know wants to play again: Johnny Manziel.

That is, until Thursday morning when two reports from NFL Network’s Ian Rapoport had Manziel connected to seemingly real interest from an NFL team. According to Rapoport, Manziel met with New Orleans Saints coach Sean Payton during Super Bowl week to discuss a possible return to football. Rapoport added in subsequent tweets that he believes Manziel has kept a low profile in recent months, and that New Orleans is taking a look at him for a possible backup job.

When it comes to controversial players getting a chance to play, all it takes is one team with interest. Most franchises wouldn’t deign to bring on Greg Hardy a few years ago following his domestic violence arrest and appeal, but the Cowboys did and so he played the 2015 season. Ray Rice never played another down in the NFL, despite working hard on his image for a few years following the release of the elevator tape.

A big discussion going on right now in NFL circles is whether Colin Kaepernick is being blackballed. A report from Bleacher Report’s Mike Freeman has an anonymous AFC general manager saying 70 percent of the league’s front office people hate his guts and wouldn’t sign him because of his anthem protest, while the remaining question his ability or don’t think it’s good enough to be worth the grief some would give the team for signing Kap.

Knowing what we know about the conservative nature of NFL front office culture, this isn’t hard to believe. There’s still time left in the offseason, of course. While Kaepernick isn’t getting any bites now, that doesn’t necessarily mean a team won’t look at him for a backup role after the draft. Teams that still have a vacancy at starting quarterback are likely waiting until the draft to see which franchises address the position there, and then react. If it gets to be June or July and Kaepernick hasn’t received any offers, it will be impossible to deny that he was avoided because of politics.

Meanwhile, here is Manziel, who hasn’t played a down since late in the 2015 season, and even then not all that well, getting what appears to be serious interest. At the moment, you’d have to assume Manziel has an inside track on Kaepernick solely because there’s a team connected to him. Kaepernick has established success and is coming off a 2016 season in which he put up his best numbers in several seasons, and yet no team has even considered him for their plans for the future. The longer into the offseason this goes, the worse it looks for Kap.

Is this a function of cost? Possibly. Kaepernick is coming off a contract with an annual salary of more than $10 million per year. Even in a backup role, he would likely demand several million per season. Manziel, meanwhile, despite being a first-round pick, was persona non grata in the NFL for over a year. In the Saints do, in fact, sign him, it would likely be for a minimal deal laden with incentives. That’s hardly the only factor, but it is one.

Because of Manziel’s on-field college heroics and the fact that he’s still only 24 years old, even with a recent past that includes a domestic violence charge and substance abuse problems, a team can still cling to the idea of potential with him. And potential is a powerful allure for NFL teams. That’s how Brock Osweiler ended up getting $37 million guaranteed from the Texans in 2016. It may not make a whole lot of sense or have a great track record, but that’s the prevailing thinking from teams. That’s even how Mike Glennon got a lucrative deal with the Bears despite not playing since 2015.

Manziel and Kaepernick are both players who will expose their new team to ample criticism, for considerably different reasons, from considerably different sources. It just goes to show that, once again, the idea of teams worrying about media distractions or public criticism matters little if they prize the talent. Kaepernick has performed better and behaved better than Manziel in recent years, but Sean Payton apparently believes there’s still a chance that Manziel could be molded into a franchise quarterback of the future, at a time when Drew Brees is getting toward the end of his career.

That’s all that matters in terms of employment. There are reasonable arguments to be made that Kap is a better player and a better person, but all those mean little if teams aren’t willing to give him a fair shake. These organizations can arbitrarily choose which issues bother them. And if Manziel’s are worse, well, they can always push for it to be framed as a redemption story.

The idea of Kaepernick being the default Week 1 starter for a team going into the 2017 season has likely already sailed. That means he’ll have to settle for a backup role if he’s going to play this coming year. A few places make perfect sense, but that’s all speculation for now. All we know for sure is there’s reported interest in Manziel, and not for Kaepernick. That’s not the complete picture, but it’s enough to think there’s a better chance of Johnny Football than Kap in 2017.