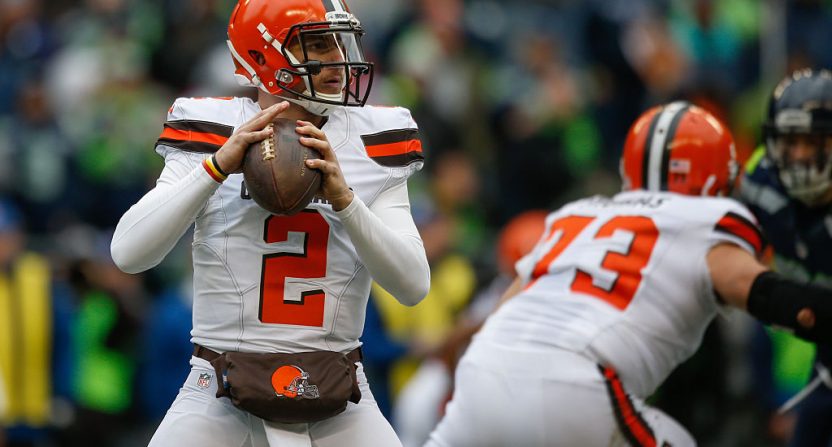 Johnny Manziel is back in the news and this time it isn’t because he was arrested, punched someone, or got into a terrible situation involving god knows what. Instead, he’s back in the news because NFL teams are interested him in!

Comeback is real: Johnny Manziel has re-hired agent @ErikBurkhardt after Burkhardt had him make serious commitments, per @MikeGarafolo & me

Burkhardt cut ties with Manziel in February of 2016 after Manziel’s ex-girlfriend Colleen Crowley accused him of domestic violence. Manziel then hired Drew Rosenhaus to be his agent, but Rosenhaus walked away from him two months later in April of 2016.

Burkhardt and Manziel joining forces once again must mean Manziel is serious about a comeback and righting the ship.

Johnny Manziel, serious enough to get Burkhardt to take him back, is drawing real interest from teams at the Combine, per @MikeGarafolo & me

Manziel is still young at only 24-years old, but hasn’t played in the NFL since the 2015 season and was cut by the only team to ever employ him, the Cleveland Browns, in March of 2016.

The possible comeback news comes at an odd time, as just days ago, Manziel was in court and told the Judge Robert Canas he was wary of working with the NFL because of how the league handles player issues.

The comments from Manziel came when he appeared in court to talk about the agreement he made with the Dallas County district attorney’s office regarding the dismissal of misdemeanor assault charges filed against him surrounding the Crowley incident.

“Everything has been going extremely smoothly and my life is trending upward, so I don’t even want to let this get anywhere near the rabbit hole that you were describing,” Manziel told the judge. “This situation is in my hands… I need to get my life in order. These are the things I need to do.”

The idea of Manziel returning to the NFL pops up it seems like every couple of weeks, but this is the quarterback’s first big step at actually making it back into the league.

One big problem could stop Manziel from returning however and that’s a potential six-game suspension. Due to his off the field domestic violence issues, Manziel could be suspended six games under the league’s domestic violence policy if he signs with a team.

Manziel only played in 14 games with the Browns during his two years in the league and racked up seven touchdowns through the air and seven interceptions.

Johnny Manziel has re-hired his original agent, who once said he wanted Manziel to make serious commitments. COMEBACK? pic.twitter.com/G6z57828NB