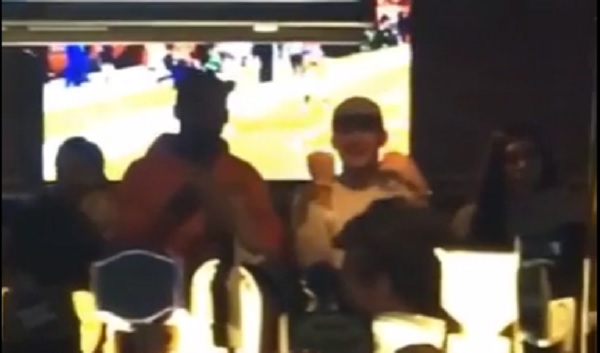 If you didn’t think Johnny Manziel was already partying his way out of the NFL, here is example No. 7,927 suggesting he just may be doing just that. Manziel was seen living it up in a Dallas bar during the AFC Championship Game. Rehab clearly worked, huh?

As described by Busted Coverage, Manziel was having a good old time at Clutch drinking shots. In the video below, you can see Manziel dancing to the music playing while he appears to be holding a glass. This alone is hardly anything worth getting too excited about, but this is Manziel we are talking about and he has obviously lost the benefit of any doubt.

A more definitive image shared via Snapchat showed Manziel taking a sip from a glass as well.

Look, there is nothing wrong with an NFL player having a little fun during the offseason. In fact, those players no longer in season should have the freedom to do whatever, wherever, whenever they want.

Manziel, though, is in a different category and he only has himself to blame. Manziel was a first-round draft pick of the Cleveland Browns and he has done far more to ensure he serves as a career back-up at best than become a franchise quarterback, and that is a damn shame given his natural talents.

Instead of doing anything and everything he can to make a push to lock down a starting job — IN CLEVELAND — he instead is too busy having a good time. Again, there is nothing wrong with going out and having some fun, but when that party lifestyle interferes with your professional career, that is a problem.

In the past month, Manziel has been dumped by the marketing company owned by LeBron James. Nike has contemplated dumping him too. Even the Cleveland Browns could be on the verge of cutting ties with Manziel as the franchise looks to turn a new page under new head coach Hue Jackson. Manziel is a hot mess who lacks the foresight to understand the damage his public image has taken time and time again.

I love a good redemption story, and Manziel only being 23 years old leaves me a sliver of hope he still has time to reshape his image and get his priorities right. But hey, if partying is more important to him than success in the NFL, then fine. So be it. Nobody can make him be a good role model. Nobody can make him think the NFL is the most important thing in his life. Nobody can tell him what to do and what not to do.

He is a grown man, even if he does continue to act like a foolish frat bro who will forever be attempting to relive his college days into his 50s. That works for some people. Maybe Manziel will end up being one of those poor souls who never comes close to sniffing his full potential as a football player, or perhaps even more troubling, as a person.