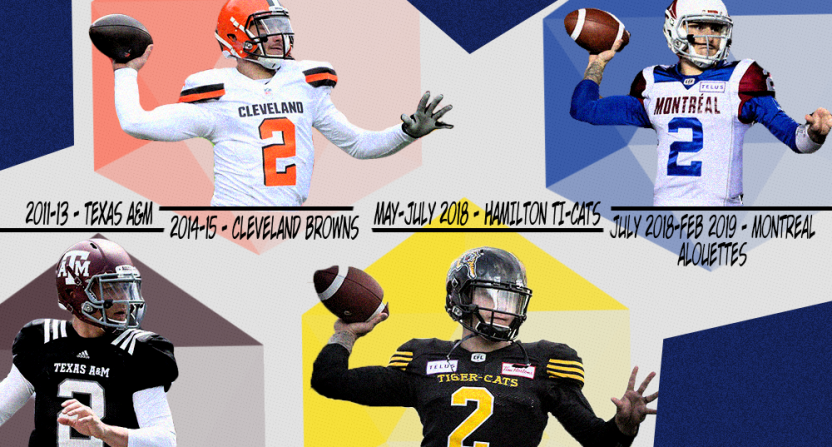 He’s Johnny Canadian Football no more. After being banned from the CFL in February for “contravening the agreement which made him eligible to play in the league,” Johnny Manziel has landed in the Alliance of American Football with the Memphis Express (led by head coach Mike Singletary). ESPN’s Adam Schefter first reported that Manziel had signed a standard AAF player contract, and then added that the San Antonio Commanders had renounced their college-affiliation claim to him and that Memphis had the first chance to get him on waivers. The Associated Press then reported that Manziel would join Memphis.

If there’s a logical AAF landing spot for Manziel, Memphis is it. The Express are alone in the AAF basement at 1-5 after a 22-9 loss to the (now 2-4) Salt Lake Stallions Saturday, and they have plenty of quarterback issues. Penn State alum Christian Hackenberg started the season and was ineffective, eventually being replaced by LSU alum Zach Mettenberger. But Mettenberger hasn’t been great either, and he suffered an ankle injury on Memphis’ first offensive snap Saturday; he was replaced by Brandon Silvers, and didn’t return to the game. So they’re certainly a team that could use some quarterback depth.

But there are plenty of questions about just how well Manziel will do in this league. In the CFL last season, he went 2-6 as a starter for the Montreal Alouettes, completing 106 of 165 passes (64.2 percent) for 1,290 yards with five TDs and seven interceptions. Yes, four of those interceptions came in his debut, and he did look better over time, but he lost his job to the unheralded Antonio Pipkin for a while and wasn’t great even by the end of the year. And yes, the Alouettes were 5-13 and had issues beyond Manziel, but he wasn’t exactly showing off great progress with them; if not for the ban from the league, he probably would have entered training camp as their starter this year, but he wouldn’t have started for anyone else in the league given his performance so far, and he might have even lost that starting job in camp.

Beyond that, Manziel’s exit from the CFL raises its own questions. The league wasn’t specific about what part of that agreement he violated, but there have been reports that this came from him dodging mandatory counseling sessions (he was only allowed into the CFL on strict conditions considering his history of a domestic violence arrest and plea deal). On some levels, that could be concerning considering the past issues he faced at Texas A&M and with the Cleveland Browns.

Of course, it also seems like Manziel may have triggered that dismissal himself as part of a plan to get back to U.S. football. He was on a two-year CFL contract without an out, and he tweeted when he was released that he was “look[ing] forward to exploring new options within the United States,” so there’s a school of thought that his CFL ban was more about him finding a creative exit from a contract so he could head to the AAF.  (But, if that’s the case, it’s interesting that he waited almost a month to sign with the U.S. league.)

While those sorts of contractual maneuverings are less problematic than actual issues, they still bring up some worries about just how committed Manziel will be to this new league. An advantage here is that the AAF has a built-in NFL out in its contracts, so if Manziel does play well enough to draw NFL interest, that’s all well and good. However, there’s also always the possibility of him pulling some shenanigans if things don’t work out so he can get released and head to the XFL next year.

We’ll see what happens with Manziel, and how soon Memphis decides to use him. He’s at a disadvantage compared to the other Express quarterbacks considering that he’s joining the team midseason, without the benefits of training camp or the games they’ve played so far. But as previously mentioned, they are having plenty of quarterback issues, and they may be more eager to give him a chance quickly than any other AAF team would be.

That’s probably a good thing for both sides, as Manziel proved quite unhappy sitting on the bench with the Hamilton Tiger-Cats when he first joined the CFL, eventually forcing a trade to Montreal. So he needs to be somewhere where he’ll play soon, but the Express do look like a good destination there. And there could be some high-profile chances ahead for Manziel, perhaps especially Memphis’ game against the undefeated Orlando Apollos in two weeks; that’s a game that CBS just announced they’re picking up for their broadcast network. If Manziel can impress Singletary and the other Express coaches in practice, he might get a shot to play, and he might have quite the audience watching. We’ll see what’s next for him.