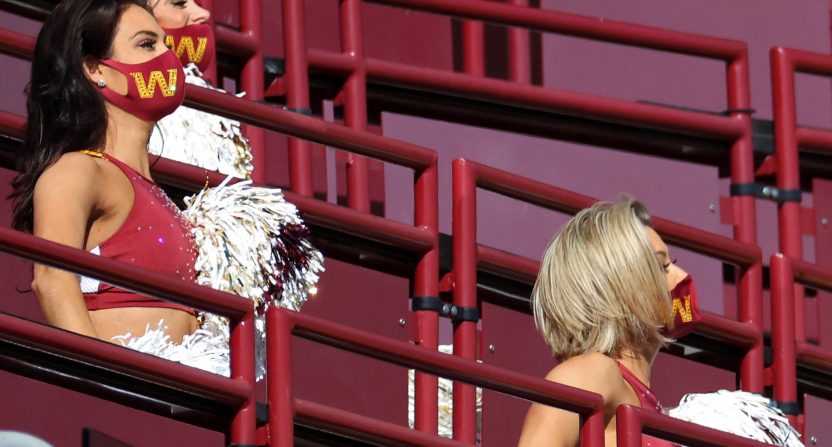 While so much of the coverage around Jon Gruden’s emails has focused on the racist, homophobic, and misogynistic language, a lesser discussed aspect is the creepy sharing of Washington Football Team cheerleader photos. Specifically, photos from a topless photoshoot that then-general manager Bruce Allen would share with other people, such as Gruden.

The photos aren’t a new development. They were uncovered as part of a New York Times investigation in 2018, further chronicled in a Washington Post article in 2020, that alleged several team cheerleaders were “required to be topless” for a photoshoot that was attended by “a contingent of sponsors and FedEx suite holders,” all of whom were men. Several of the cheerleaders were then instructed that they were required to serve as “personal escorts” for the male sponsors during an evening event.

However, the release of these emails (but not many others) is bringing the discussion back around because, as far as anyone can tell, the NFL hasn’t really done anything of value about the mistreatment or harassment.

Here @espn I rewrote your headline. @4lisaguerrero and I are some of the only former cheerleaders working in media, so I will say what current cheerleaders cannot. The NFL is not a safe place for women. THAT is the story today.https://t.co/5OHMIoexB3

Emily Liebert wrote about the lack of power that cheerleaders have in the NFL and how that doesn’t appear to have changed since the initial reporting of the WFT incident.

Gruden’s emails prove what I have long known — that NFL cheerleaders are not safe within the patriarchal boys’ club of the NFL. They have no protection. Unlike the players who have fought tirelessly for their own rights through the formation of the NFL Player’s Association (NFLPA) and their annual collective bargaining agreement (CBA), cheerleaders do not have a union. Their contracts are left up to the individual teams, and NFL cheerleaders are rendered vulnerable and powerless to the influence, advances, and abuse of men within their respective organizations. And because cheerleaders are paid pennies in comparison to the multi-million dollar salaries the players receive, they do not have a voice. When it comes to advocating for their own rights, they’re left with an unthinkable ultimatum: Speak out and risk losing their job, their source of income, and their dream, or stay silent and allow the cycle of abuse to continue.

Many others have been sharing their concerns about NFL cheerleaders, the lack of coverage they are receiving, and the lack of help they seem to be getting from the league, on social media. Specifically, what happened to those photos that Bruce Allen and Jon Gruden were sharing, and what is the NFL doing to protect cheerleaders from that continuing?

I’m concerned about how WFT handled sensitive data (security & access management), specifically footage & images of cheerleaders. Now I am even more concerned that @NFL executives have access to this type of data within the emails. How is this data CURRENTLY being protected?

the @NFL knows that topless photos of WFT cheerleaders are getting shared around in email chains?! https://t.co/lmdHjhV702

Yeah, everything about this story was awful https://t.co/C8o4sUS8gi

The repugnant Bruce Allen forced team cheerleaders to do a nude photoshoot and would use the Washington team email account to send those imagines to people.

But sure: "the culture is actually damn good" 😑pic.twitter.com/9kc78uoU0D

We’ll have to wait and see what the NFL does, if anything, next. But the cat is out of the bag…again. They’re hoping that people will just move on but it doesn’t seem like this story is going away just yet.