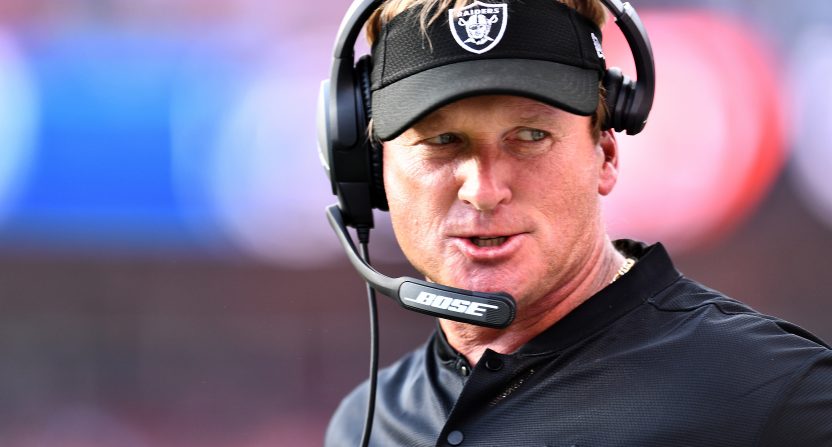 Jon Gruden and the Oakland-Soon-To-Be-Las-Vegas Raiders have quickly become one of the leading punching bags in the NFL. It was easy to question some of Gruden’s moves this offseason after his lengthy stint in the broadcast booth, but none pales in comparison to his trading away of all-world defensive end Khalil Mack.

Sure, the Raiders got a good return from the Bears for Mack (two first round picks) but you typically just don’t trade away future Hall of Famers, no matter how bad the relationship may be. Mack is already making a huge impact in Chicago with a couple sacks and even a touchdown while Oakland sputters to an 0-2 start. In fact, Mack is outproducing the entire Raiders defense by himself.

But what’s making it worse are continuous comments from Gruden that show a complete detachment from reality. His latest gem? Opining on how hard it is to find elite pass rushers in the NFL. You think!?!?!?!

Yes, it is hard. Very hard. IT’S WHY YOU DON’T TRADE THEM AWAY ONCE YOU FIND ONE! It’s why a team was willing to trade you two first round picks for one! If everyone in the world is questioning this trade, why is Gruden constantly calling attention to it??

The truth about the Mack trade is that the Raiders could spend every asset they got from the Bears solely on the pass rush and there’s absolutely no guarantee that they could find a player half as good as Mack. Defensive ends drafted in the first round are notoriously dodgy as an investment – does anybody remember Vernon Gholston? Coming out of Ohio State he was a can’t miss prospect with a body built like a tank and every measurable you could think of. He lasted just a couple seasons with the Jets and was soon out of the league. You hold onto guys like Mack with everything you’ve got because they’re that special. Apparently everyone can see that except the Raiders head coach.

Either Gruden is intentionally wanting his entire fanbase and every person who covers the league to do a universal facepalm or he’s just suffering from short term memory loss. And this quote is just one of many dripping with cruel irony. Gruden has also gone on record as brilliantly saying, “We’ve gotta do something to get more pressure.”

Do you think anyone in the Raiders organization – owner Mark Davis, one of Gruden’s fellow coaches, a player, heck even a janitor – has bothered to tell Gruden that he could have easily solved this predicament by not trading one of the best pass rushers in the league?

These quotes continually talking about the lack of a Raiders pass rush just make Gruden look silly and it calls to question Gruden’s comeback to the sidelines. Gruden was ESPN’s highest paid employee as their lead analyst for Monday Night Football. He was entertaining in the broadcast booth in spite of some of his foibles (if Khalil Mack was a 5th round QB you can bet Gruden would have never traded him) and had a great gig. However, the lure to return to coaching was always there as rumors followed him around for years. It’s been nearly a decade since Gruden was an NFL coach, though, and right now it’s showing. Maybe the Raiders and ESPN can work out a trade where Jason Witten and Booger McFarland become co-coaches and Bristol gets to take Gruden back.