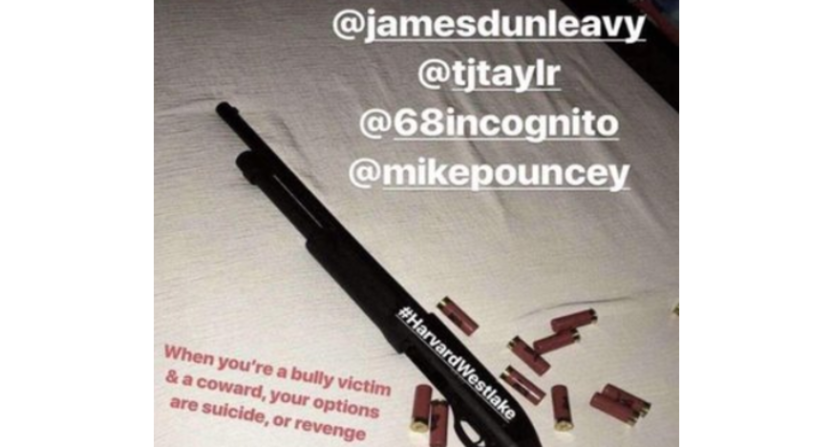 The story of former NFL tackle Jonathan Martin being detained by police after making threats that closed down his high school just keeps on getting worse. Martin posted an apparent gun threat on Instagram Feb. 22, tagging former classmates as well as two former NFL teammates accused of bullying him during his time with the Miami Dolphins and writing his high school’s name on the gun in the photo. That led to the school being shut down the next day and to Martin being taken into police custody, and TMZ has now obtained court documents about Martin having weapons when he was detained:

Officials say they found Martin after getting a call about a “suicidal male with a gun” at a hospital in Glendale, CA.

He was placed on a 72-hour psychiatric hold because officials believed he was a possible danger to himself and others.

They searched his car and found a loaded 12-gauge shotgun, a large knife, an ax and a cell phone. A second shotgun was found at his parents’ home.

Officials spoke with Martin’s girlfriend who said he’d been angry and depressed since she met him, but over the past month started making suicidal statements.

The GF says Martin had also been “writing on the walls” of his home.

As John Breech notes at CBS, Martin hasn’t yet been charged with anything, and it’s not clear that charges are necessarily going to follow. However, Martin’s behavior was certainly disturbing. And TMZ says the former classmates tagged in the Instagram post say Martin previously sent them threatening messages in the summer of 2016:

“And I blame you above all. You’ll get yours, eventually — I have already paid my price for being a bad person. I wish you nothing but the worst. Best, Jonathan Martin.”

He sent a second message to the same classmate that said, “You’re a bad person. You irreparably damaged people’s lives. And you will be exposed publicly. If there is anything else I accomplish in life, it will be making sure you are outed and shamed for who you are.”

Martin later apologized to at least one classmate in August 2016. But TMZ also notes that he bought one shotgun around the time of those messages, and another one shortly before the recent Instagram post.

The classmates mentioned here are James Dunleavy (son of Mike Dunleavy, brother of Mike Jr., he went on to play for USC) and T.J. Taylor. The former NFL teammates Martin tagged are Richie Incognito and Mike Pouncey, both of whom were implicated in the bullying investigation. We’ll see what further developments there are on this story, but Martin’s behavior definitely raises a lot of questions, and a lot of concerns for those he’s been sending these messages to.