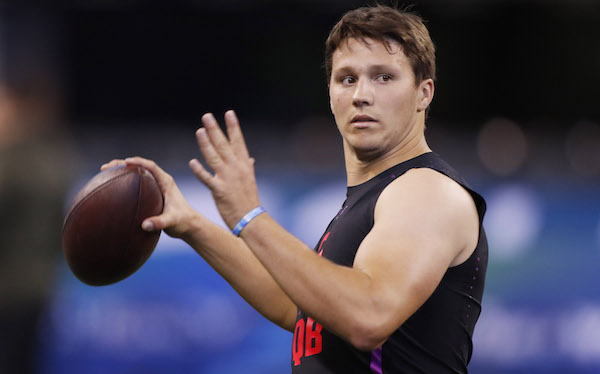 As soon as someone hears a draft analyst mutter the phrase “he’s got a big arm,” the red flags should pop no later than immediately.

The phrase has been said about a number of young quarterbacks entering the NFL Draft in years past. Ryan Leaf, JaMarcus Russell, Josh Freeman, Jeff George, and Jay Cutler are among a few who were given the “big arm” label coming out of college and then failed to play at an elite level once they got to the professional ranks.

This year, former Wyoming quarterback Josh Allen is being touted as the prospect with jaw-dropping arm strength. The majority of the people who cover the draft for a living expect Allen to be selected in the first round.

He has the measurables (6-foot-5, 233 pounds) to go along with his big arm, causing NFL scouts to uncontrollably drool as if a dentist just doused their mouth in novocaine.

However, many of these talent evaluators continue to disregard Allen’s lack of success when actually playing the game of football — something that is an actual factor when it comes to playing in the NFL. (Surprising, I know.)

As Wyoming’s starting quarterback for the past two years, the school failed to win more than eight games in each season.

Defense can’t be blamed for Wyoming’s lack of wins with Allen under center either, since Cowboys defenders gave up the ninth-fewest points per game to their opponents in 2017.

Last season, Allen failed to throw more than one touchdown in 64 percent of the games he appeared in (11). He didn’t throw a single score in three of Wyoming’s 2017 matchups, as well.

Even when Allen did experience success last year, the majority of it conveniently came against horrible competition.

So if he only plays against the 2017 Cleveland Browns during his NFL career, the young quarterback should easily end up as a first-ballot Hall of Famer when his career comes to a close.

Allen’s accuracy was an ongoing issue during his college career too, completing only 56.1 percent of his passes in 2016 and 2017. At least 50 FBS quarterbacks last season finished with a completion percentage higher than 60.

It really doesn’t matter how strong of an arm Allen has if he’s more successful at completing passes to the people in the stands than his actual receivers.

Due to his physical traits and despite his lack of success at the college level, the former Wyoming quarterback is still considered a major project by a number of people who cover the draft. The only problem is that NFL teams today no longer have the patience for a young signal caller to sit for a couple of years before becoming a full-time starter.

In the past two years, 13 rookie quarterbacks have started at least one game in the NFL. Six of these rookie signal callers were drafted in the first round, a place where many believe Allen will be selected.

So this idea that whoever drafts Allen this year is just going to sit him for a few seasons is just plain hilarious.

Despite all of what was previously mentioned not being in the young quarterback’s favor, it’s still possible that Allen could find a way to succeed in the NFL. The likelihood of that actually happening just doesn’t seem to be heading in that direction.