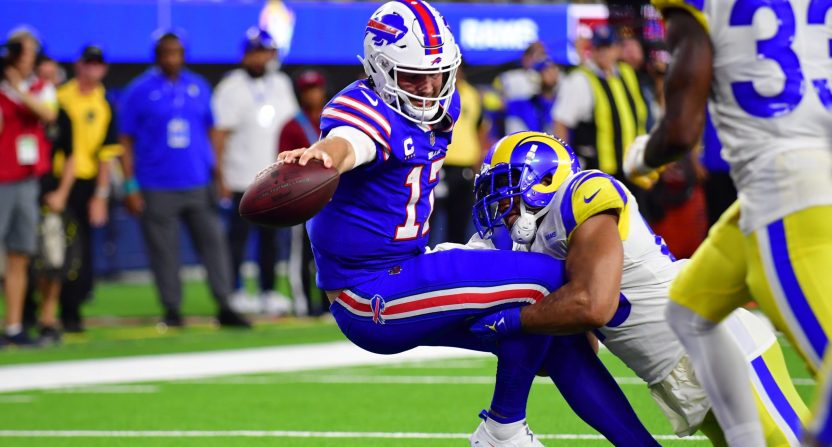 The Buffalo Bills entered the 2022 NFL season as the Super Bowl favorites, and they showed why in the league’s season opener against the defending champions.

Josh Allen looked like a future NFL MVP, completing 26-of-31 passes for 297 yards, three touchdowns, (a misleading) two interceptions, and a 112.0 passer rating, while adding 10 carries for 56 yards and a touchdown on the ground (he also had an awesome stiff arm). The 6’5″, 238-pounder put his unique dual-threat ability on full display and left the Los Angeles defense with no answers.

What a start for Josh Allen and the Buffalo Bills!

They have the first touchdown of the 2022 NFL season. 🏈 pic.twitter.com/P1iSY5dBzp

Josh Allen and Gabe Davis connect for a bomb on the Buffalo touchdown drive! 🏈💣 pic.twitter.com/LCZ72HgXwi

Josh Allen is a beast! What an effort for the rushing touchdown! 🏈💪 pic.twitter.com/E92zG3tM0v

The Buffalo defense was also sensational. Buffalo intercepted Rams quarterback Matthew Stafford three times and held him to a 63.0 passer rating. After winning a championship with the Rams last season, Von Miller — featuring an interesting new haircut — made his debut with the Bills and sacked Stafford twice (Buffalo as a team had seven sacks).

Von Miller with his second sack of the night! 🏈💪 pic.twitter.com/yVbwHkocoH

Even for a Super Bowl favorite, this was an incredibly impressive, eye-opening performance.

Here’s a look at how the NFL world reacted to the Bills dominating the Rams in the season opener:

The Bills haven’t punted in 2 of their last 3 games.

The Bills have not punted in 4 of their last 6 games including playoffs.

I am 99.99% sure this has never happened before in NFL history.

The #Bills are the only team over the last 20 seasons to win a season-opener by 20+ Pts in a game with 4+ turnovers, per @ESPNStatsInfo

What were the keys to Josh Allen's success?

The Bills sacked Matthew Stafford seven times without blitzing on a single play.

Buffalo's seven sacks with four-or-fewer pass rushers is tied for the 4th-most in a game since 2016.#BUFvsLAR | #BillsMafia pic.twitter.com/AX8VoPOyAK

Live look at Chippewa after the first Bills’ touchdown of the season. @WGRZ pic.twitter.com/yT6gZ1eVN8

The #Bills didn’t play their best game by far and still beat the defending Super Bowl champs by 21. One down 16 to go.