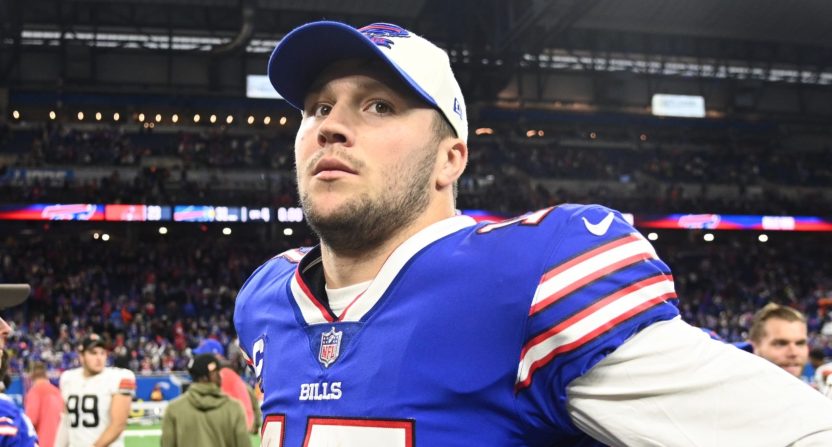 Entering this season, Buffalo Bills quarterback Josh Allen was seen by many as one of the top quarterbacks in the entire NFL and was widely considered a preseason candidate for the league’s MVP award. And while the Bills’ offense has been among the most dominant in the league this season, statistically, Allen has certainly had his individual struggles.

The Bills offense has been plenty dominant this season, ranking No. 2 in the entire league in both scoring offense and total offense with 28.1 points per game and 417.4 yards per game. But Josh Allen himself has struggled with turnovers all season.

As NFL on CBS points out, Allen actually leads the entire nation in turnovers with 14, and he’s been especially bad recently.

Most turnovers this season

*has 7 INT in last 5 games pic.twitter.com/kcvFCid5QP

As NFL on CBS points out, Allen has the most turnovers in the league with 14 this season. He’s ahead of both Matt Ryan and Davis Mills, who each have 12 turnovers this season. But making things even worse for Allen is the fact that he has seven interceptions in the last five games alone.

I told y'all this bum wasn't actually good. Y'all doubted me. https://t.co/Qh88NcAxbS

This get underplayed a lot but Josh Allen has a busted arm that probably needs surgery and he's playing through it. That's a big part of the problem https://t.co/dtAKyfFmSU

And not a whisper. Let this be Jones though. https://t.co/aWqoXb7tyt

not very good at the game of football https://t.co/w6viibxik3

Always said he was overrated. https://t.co/qB8kQNUyno

He basically is having to overcome his own mistakes week in & week out, today included. https://t.co/YjDI2Md1nv

Allen has also been particularly bad in the red zone, throwing five red zone interceptions in the last six games, which is certainly not the sort of season he expected to have.