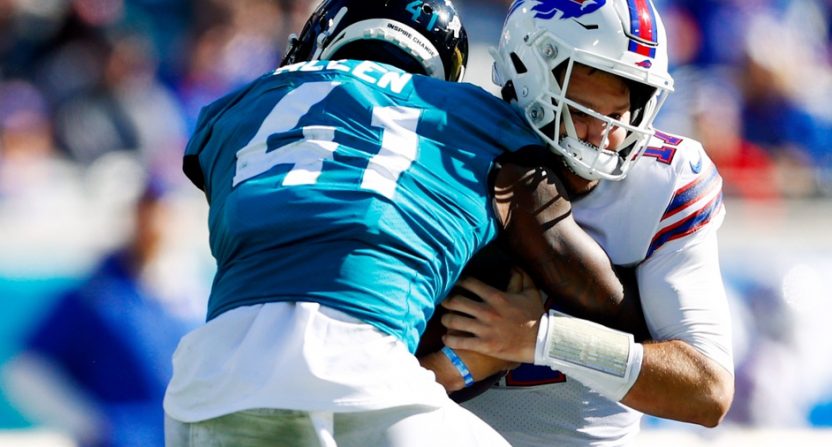 Given how many players in NFL history have had fairly generic names, it’s a wonder that it took until today for a player to sack another player with the same name. But here we are.

On Sunday, Jacksonville Jaguars’ defensive end Josh Allen sacked Buffalo Bills quarterback Josh Allen with seconds remaining in the second quarter, marking the first time something like that had ever happened.

While many NFL fans are very familiar with the Bills quarterback named Josh Allen, this should make for a good reminder that the Jag’s Josh Allen is actually pretty good in his own right, making the 2020 Pro Bowl when he was a rookie.

The sack is a great reason for the Josh Allens to get to know one another. Earlier in the week, QC Josh Allen said he’s never spoken to DE Josh Allen but they have messaged on social media.

Of course, technically this situation might have happened before 1982 because that’s when the NFL started counting the sack as an official stat. But let’s not nitpick.

It's the first time a player has sacked a QB with the same name since the @NFL started counting sacks in 1982.

And of course, if you’re going to have a situation like this, there’s no way that everyone isn’t rushing to Twitter to immediately crack the joke they’ve been holding onto ever since they realized this might be a possibility. So many Spider-men memes…

since it is technically relevant today:

Now if only Josh Allen can somehow intercept Josh Allen and then Josh Allen scores a touchdown off of Josh Allen, well, we’ll all meet back here for another round of jokes.

UPDATE 1: We did it! Josh Allen has now intercepted Josh Allen, too!

UPDATE 2: Turns out, Josh Allen can also recover a fumble by Josh Allen. We are running out of things for Josh Allen to do to Josh Allen.