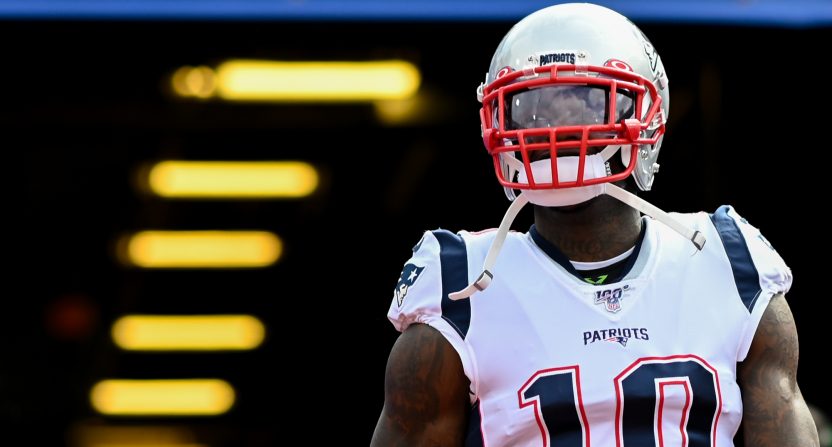 ESPN’s Adam Schefter reported on Friday that wide receiver Josh Gordon was being reinstated by the NFL following his latest indefinite suspension. Schefter said that Gordon would be expected to be eligible to play for an NFL team as soon as Week 4.

There was a lot of speculation about which NFL team might want to sign the 30-year-old wide receiver, who had been suspended indefinitely for violating the NFL’s policy on performance-enhancing drugs and substance abuse, his fifth-such suspension. However, given that Gordon led the league with 1,646 receiving yards in 14 games in 2013, there remains plenty of interest in his potential. The Seattle Seahawks, New Orleans Saints, and Tampa Bay Buccaneers were all thrown out as potential suitors.

Instead, it looks like Gordon will be headed to Missouri to catch passes from Patrick Mahomes for the Kansas City Chiefs. Adam Schefter first reported the news.

The Chiefs make a lot of sense as they’ve been desperate to find a complementary wide receiver across from Tyreek Hill after Sammy Watkins left for free agency during the offseason. While Mecole Hardman, Demarcus Robinson, and Byron Pringle have all played, none of them have been able to provide the value lost with Watkins. While Travis Kelce is the team’s top pass-catcher, Hill leads all wideouts with 267 yards while the other three wide receivers have combined for 260 yards total.

Not to mention, the Chiefs are 1-2 and in need of a boost to get back on track to return to the Super Bowl for the third consecutive year.

NFL fans and media members certainly had some strong thoughts about the Chiefs signing Josh Gordon now that he’s reinstated.

Josh Gordon is 30 years old. Hasn't been a consistent NFL contributor since 2013. Has to learn new offense, timing, quarterback. Got to be realistic here.

If Josh Gordon can’t bounce back in KC, he can’t bounce back anywhere. I honestly just can’t wait to see what they do with him. Veach recognized the problem, and instead of continuing to rely on Drunbackwards and Pringle on the outside he went and got a guy. 0 risk, high reward.

Signing Josh Gordon is all you need to know about how the Chiefs feel about Mecole Hardman and Demarcus Robinson. All you need to know. They also watched those drops yesterday from Pringle and Kemp and knew that they had to do something. I applaud them for doing it.

Whether the Josh Gordon move does or doesn’t pan out doesn’t matter to me, the fact the #Chiefs were willing to make a move and change things up is welcomed in my book. They didn’t bury their heads in the sand and act like everything would just fix itself.

It’s unknown how soon Gordon will be available for the Chiefs but he’ll likely hit the ground running this week as the team practices for their game against the Philadelphia Eagles on Sunday.