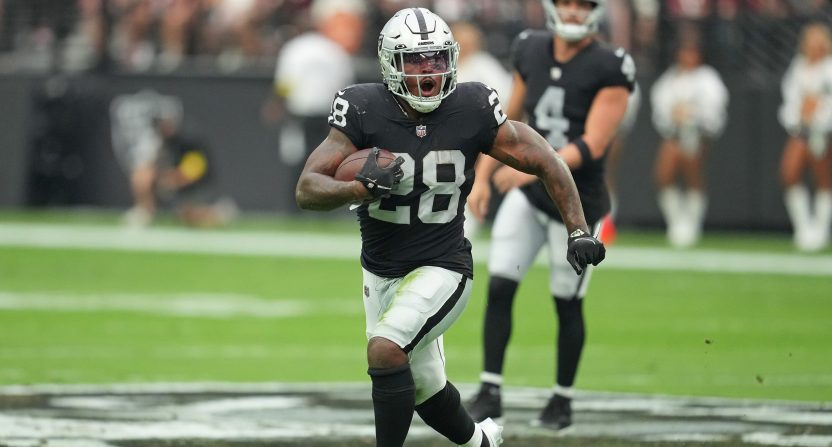 Running back Josh Jacobs will be active for the Las Vegas Raiders on Sunday for their game against the Tennessee Titans. Whether or not he actually plays remains to be seen.

ESPN NFL insider Adam Schefter initially reported that Jacobs flew separately from the team to Tennessee because of an illness and that he would wait until warmups to figure out if he would play.

Raiders’ RB Josh Jacobs, who flew separately from the team to Tennessee due to an illness and is listed as questionable for today, will work out in pregame warmups to determine his availability. There is optimism he will be ready to play, but no decision until pregame warmups.

Josh Jacobs is here and is checking out the field pregame. A good sign. #RaiderNation pic.twitter.com/gIfQDpqyBC

Apparently, that went well because Schefter then reported that while Jacobs is questionable, he is now active for the game.

That’s huge news for the 0-2 Raiders who are looking to break the season-starting slump but will need all the help they can get. The team will be without wide receiver Hunter Renfrow and linebacker Denzel Perryman and have plenty other players banged up on the questionable list headed into the game.

So far on the season, Jacobs has 126 yards on 29 carries but no touchdowns. After back-to-back 1,000-yard seasons, he garnered 872 yards and nine touchdowns last year as part of a platoon. Quarterback Derek Carr has been struggling and the Raiders haven’t been able to establish much of a run game so far in 2022, so anything that Jacobs can provide on Sunday will be very welcome.

Some around the NFL think this has the potential for a Michael Jordan flu game parallel.

The Raiders are 1.5-point favourites against the Titans today on @FanDuelCanada. https://t.co/rVP5flsSbi

I am making Jacobs a START recommendation in all fantasy formats. Defenders will think twice about tackling him since nobody wants to get an illness https://t.co/QYNAdhufLV

JOSH JACOBS is about to have his Michael Jordan game! #RaiderNation https://t.co/Cnlo3fMAAc