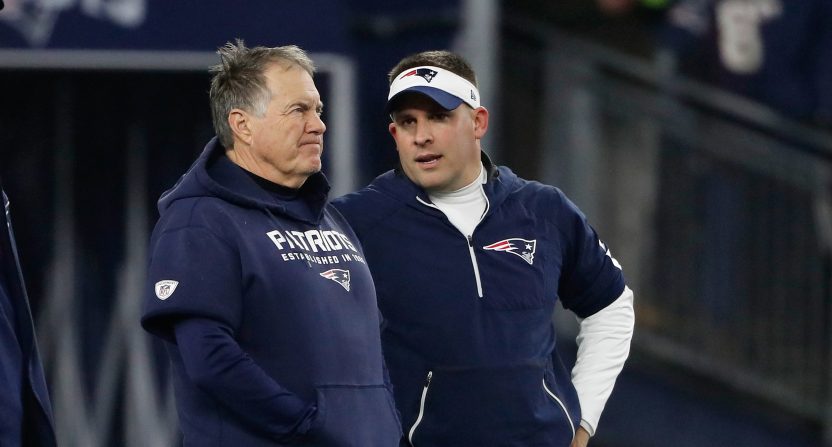 ESPN’s Adam Schefter is reporting that New England Patriots offensive coordinator Josh McDaniels is expected to take the head coaching job with the Las Vegas Raiders. Now, the only thing everyone is waiting on is to see if McDaniels actually follows through this time.

Raiders are expected to hire former Patriots’ OC Josh McDaniels as their head coach, per sources. Two sides still are finalizing the contract, but McDaniels is their man.

A longtime assistant with the Patriots, McDaniels became head coach of the Denver Broncos in 2009. However, that stint did not go well and he was fired during his second season, eventually returning to the Patriots after a brief stint as the St. Louis Rams OC.

McDaniels’ cemented his reputation, however, when it was announced that he would become the new head coach of the Indianapolis Colts in 2018. That same day, he withdrew from the position and returned to New England, a move that caused his long-time agent to terminate his representation and put a black mark on the coach’s reputation. However, time apparently healed the wound and the Raiders are more than happy to roll the dice that third time will be the charm for McDaniels.

Clearly, however, the NFL world has not forgotten what Josh McDaniels’ word seems to stand for in these situations and they’re having some fun with the “expected” nature of the report.

This is Josh McDaniels we're talking about so that's a 9 months pregnant "expected to" https://t.co/6omcj7cNcL

Well, if McDaniels gave his word that this is happening it’s totally fine to tweet this out before it’s “official”. The paperwork is just academic. What could possibly happen? https://t.co/wsOwLKpto6

Get his signature on contract.
Just a suggestion. https://t.co/RKKiz7g781

We truly will have to wait and see if McDaniels makes it to the introductory press conference this time. If he does, it’ll then be up to Josh to prove to everyone why he seems to be worth so much effort by NFL franchises.