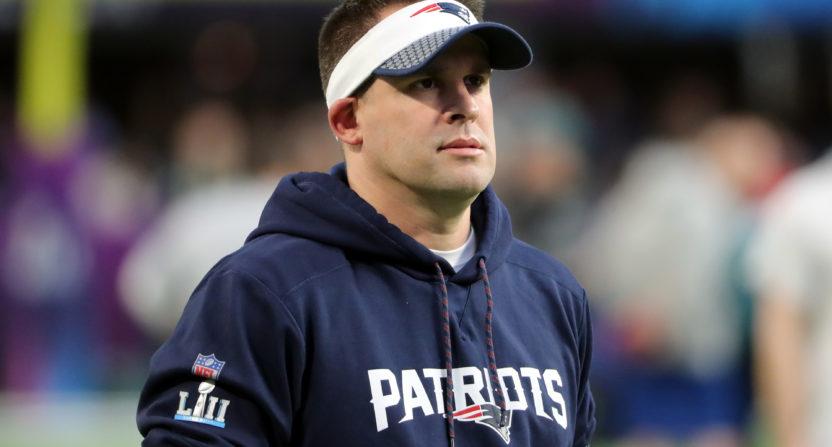 Josh McDaniels’ choice Tuesday to return to the New England Patriots despite having agreed to coach the Indianapolis Colts made him the butt of much criticism. It also cost him his agent.

ESPN reported Wednesday that Bob LaMonte has dropped McDaniels as a client in the wake of what he called “professional suicide.”

A source told ESPN’s Dan Graziano that LaMonte was stunned Tuesday when McDaniels informed him that he would not accept the Colts job and instead would stay with the Patriots.

LaMonte expected the phone call from McDaniels to be a question about preparation for Wednesday’s scheduled news conference in Indianapolis, the source told Graziano. When McDaniels told him he was staying in New England, LaMonte replied that McDaniels was “committing professional suicide,” according to the source.

Although we have no reason to doubt LaMonte’s unwavering commitment to honesty, it’s worth noting that the agent also represents Colts general manager Chris Ballard, who was probably less than thrilled about McDaniels’ flip-flop. LaMonte’s response could be about placating another client as much as it is about principle.

McDaniels has been roundly skewered for committing to Indianapolis then pulling out hours after the team had announced his hiring, especially given that his prospective assistant coaches had already left their previous jobs to join him with the Colts.

Haven’t read the article but I can tell you there is NO excuse big enough to justify this. It’s one thing to go back on your word to an organization. But having assistant coaches leave jobs to go with you then leave them out to dry is indefensible. For COMFORT?? https://t.co/hlsYviDC9l

Per ESPN, McDaniels and LaMonte have parted ways before, only to reunite, but it would presumably be tough for LaMonte to get back in the coach’s good graces after criticizing him publicly. You can’t easily jump from “There’s nothing left,” to a cheery reunion.

McDaniels’ decision to ditch the Colts could pay off if, as speculated, he winds up as the successor to Bill Belichick. But until them, he’s going to keep taking a lot of heat — and deserving most of it.