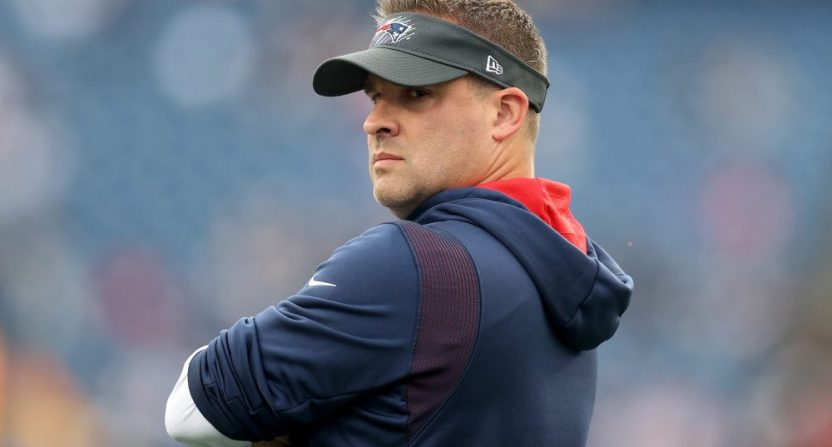 After being a popular head coaching candidate for several years and even leaving the Indianapolis Colts at the altar after the 2017 season, Josh McDaniels is a head coach again. He’ll be the head coach of the Las Vegas Raiders in 2022.

Given how many options he’s had to get back into the head coaching game since being fired by the Denver Broncos in 2010, it’s fair to ask — what was it about the Raiders that drew McDaniels? Speaking to Chris Mason of Masslive.com, McDaniels opened up.

“When you go through this process, I was very impressed with how exhaustive they were, just in their evaluation of me and my fit and how I would fit into their vision,” McDaniels said. And then you come out and you spend time with them, you meet the people, you see that everything’s done in a first-class manner. Their commitment to winning is easy to feel, to see, and to me, walking through this building and having a sense of the history and tradition of this organization and how much that impacts the day-to-day here, it really hit me. This is one of those iconic places.”

McDaniels also said that he’d been patient and selective, “maybe to a fault, sometimes.”

At least from the outside looking in, it seems as though his patience and selectiveness might have paid off. McDaniels is overtaking a good situation in Las Vegas, which hasn’t been the case for most of the Raiders hires in recent years.

Las Vegas had one of the most tumultuous seasons in the history of the NFL in 2021. But the Raiders overcame those struggles and a competitive division to reach the playoffs and nearly defeating the AFC Champion Cincinnati Bengals in the first round. Running back Josh Jacobs topped 1,000 yards rushing while tight end Darren Waller had over 1,000 yards receiving. Quarterback Derek Carr threw for a career-high 4,804 yards.

The Raiders are getting a coach who knows something about winning, at least as an assistant. He was on the New England Patriots staff for all six of their Super Bowl championships.

His time as head coach of the Broncos was less successful, though. McDaniels did start well in Denver, going 6-0 to start the 2009 season but sputtered to finish that season to finish 8-8. The Broncos then started 3-9 the following year. At that point, McDaniels was fired.

That said, there are multiple examples of coaches failing in one place and succeeding at their next stop. The best example of that is McDaniels’ former boss, Bill Belichick.