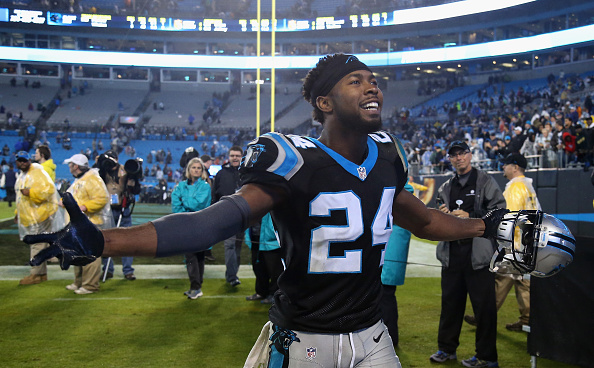 Josh Norman is the best cornerback in the NFL right now, and that’s something there’s no way around. He has been the cornerstone of a Panthers defense that has helped the team get off of a 13-0 start, which has only been accomplished eight times in the league’s history.

But former New England Patriots safety and current NBC Sunday Night Football analyst Rodney Harrison doesn’t think as highly of Norman as Norman feels that Harrison should. Thus, a feud has grown between the two.

Harrison has been on the record saying that he believes the Seahawks are more dangerous than the Panthers, and that Julio Jones had the possibility of winning his matchup with Norman.

That didn’t sit well with the 4th year corner:

Now, Harrison’s assessment wasn’t very disrespectful when you consider that Julio Jones is one of the best receivers in the game, and could possibly have a decent game against Norman. The anger could have possibly stemmed more from the fact that the Panthers are 13-0, and Harrison is saying a team that is now 8-5 is a bigger threat. That in and of itself doesn’t mean Harrison is wrong, but plenty of people have found every reason to say that the Panthers weren’t as good as their record, despite playing as well as they have been.

But, all things aside, Harrison went the extra mile in his interview with Scott Fowler of the Charlotte Observer, and said, “If the entire situation was equal, with Julio Jones having a quality quarterback throwing to him, then I think Julio Jones wins that matchup because I just think he’s physically more superior than Josh.”

Norman’s response to the former was simple: “I will restate: You are horrible at your job.”

Harrison’s rebuttal to Norman, included him mentioning that he said that Norman had not faced anyone the likes of Julio Jones up until that game, as well as acknowledging Norman as the best corner in the league:

“Before he (Norman) sits there and he rips me and says I’m horrible at my job, which is very disrespectful, he needs to shut up and make sure he reads the entire quote,” Harrison said. “That’s what he needs to do. That’s being professional.”

Twitter became the main vehicle for Norman, who took various shots at Harrison.

The feud will surely continue as long as Norman continues to play at a high level, but we will likely have to wait until Sunday to hear from Harrison, who isn’t much of a social media user himself.

Norman’s reactions to Harrison’s comments might seem extreme, but when you are an athlete dedicated to your craft the way Norman is, being undervalued for years brings out a fire in you that burns bright.

Harrison even touched on that, and mentioned that he understands it because he too was once like Josh Norman.

We will see where this goes moving forward, right now, we’re ready for more.