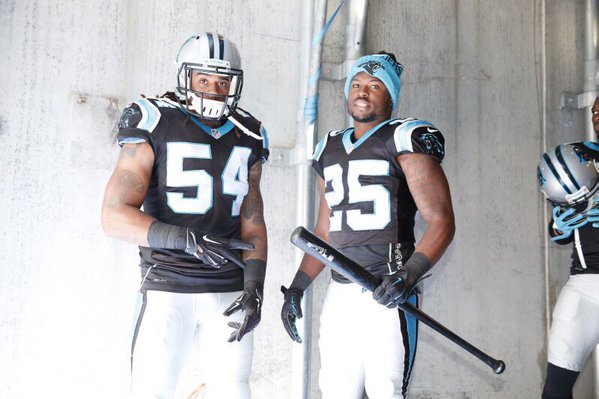 The latest revelation in the ongoing saga between the Panthers’ cornerback and Giants’ receiver is that Norman, according to ESPN’s Adam Schefter, wielded a baseball bat on the sideline Sunday, and that Beckham felt threatened.

In pregame warmups, at least one Panthers official, and possibly more, carried black baseball bats on to the field and were motioning with them towards Odell Beckham Jr. while making comments to him, per a league source. Norman later grabbed the black bat and was swinging it in pregame warmups – which, by the way, an NFL Films camera captured. Beckham, according to another source, felt threatened and it helped put him in a certain frame of mind. It does not excuse what he did during the course of the game, but it does explain what led up to the battle that still is the talk of the league today.

The Giants are reportedly “convinced” Panthers players threatened Beckham before or during the game.

Panthers cornerback Bene Benwikere, who is currently injured, suggested on Twitter that Norman’s black bat was actually some kind of symbol and tweeted out several photos of himself carrying a bat at earlier games.

Come on now my boys carry the bat with them as it symbolizes my presence still being with them at the game and the NFL has a problem???

I carried the bat out the tunnel against Atlanta and my teammates held it during warm ups that game to pic.twitter.com/SQTcIy8mrF

Coaches and players in every sport use objects as symbols of motivation the bat is a symbol pic.twitter.com/kPGvaHQuHK

Panthers have carried bats out onto field for pregame in nearly every game this season. Sunday a continuation of Carolina ritual.

Here are some videos of Panthers players, including Norman, holding a bat before Sunday’s game.

ELI greets his teammates as they take the field! #CARvsNYG 🏈

Video: One of reasons sources say OBJ went ballistic was threat from Panthers player in street clothes with a baseball bat on field. Player then gave bat to Josh Norman.

It definitely seems as though the bat is intended innocuously, and though it is entirely possible that someone yelled or gestured inappropriately at Beckham, it’s hard to imagine the receiver really felt threatened. And if he did, trying to beat up Norman on the field would be an odd way of expressing that.

OBJ knows damn well nobody was gonna swing a bat on him. Cut the shit, man.

In case you haven’t been keeping up with this increasingly petty “rivalry” between Norman and Beckham, here’s what you’ve missed:

On Sunday, Beckham and Norman tried to kill each other during the Panthers and Giants’ game in New York, then Norman called Beckham a b— post-game. On Monday, we’ve had Norman comparing Beckham to Batman villain Two-Face and Falcons receiver Roddy White saying Norman isn’t a great corner.

Beckham was suspended by the league for one game on Monday afternoon, and if anything comes of the bat saga, Norman could be joining him on the suspended list as well.