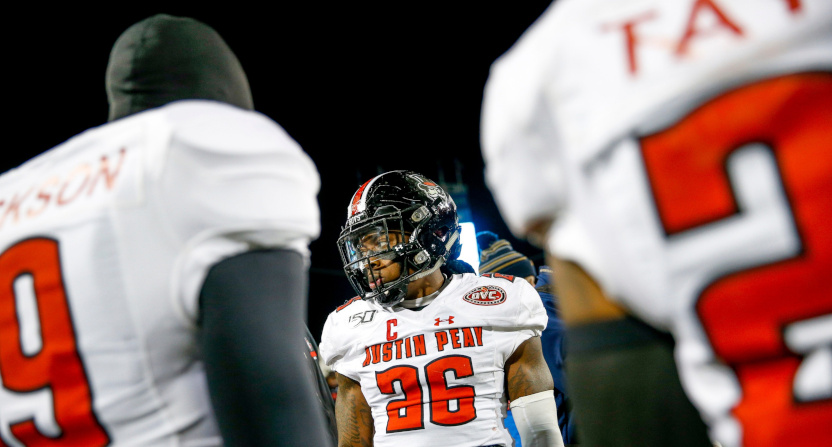 Many players undrafted by the NFL and not offered free agent contracts receive invites to try out for teams in one way or another, and while some of those invites lead to long NFL careers, many of them don’t lead to much. But even by those standards, what happened to former Austin Peay Governors defensive back Juantarius Bryant was unfortunate. On Wednesday, Bryant (#26 above, seen in a Dec. 14, 2019 game) showed up at the Atlanta Falcons’ facility based on a minicamp tryout offer he thought he’d received from Falcons’ defensive coordinator Dean Pees, but when he got there, he found out that it had been someone impersonating Pees who had texted him, and that the Falcons didn’t have a tryout spot for him. Here’s the tweet about this Bryant sent Saturday:

It’s been a rough few days, but I felt the need to clear the air and get this off my chest. Honestly ready to move on from the situation. pic.twitter.com/yUJELOstZW

As noted there, early in May, Bryant received a text from an Atlanta number saying it was Pees, and that the Falcons had a minicamp tryout spot for him. Bryant was so thrilled about that that he gave some quotes to Alexander Allard of The Allstate, Austin Peay’s student newspaper. Here are those quotes from Allard’s May 7 piece, titled “Juantarius Bryant continues to defy all odds“:

“When he told me they have a spot for me at the rookie minicamp, my heart just started racing,” Bryant said. “It made me start thinking ‘hard work really does pay off.’ I had sacrificed so many things just to get an opportunity that a lot of other people would have folded had they been in my position.

“My heart was just racing. I was filled with joy and relieved just because I am able to get an opportunity. The first thing I did was call my parents and tell my fiancé because they have been in my corner the whole time that I have been going through this and staying in my ear telling me not to give up.”

…“I knew I wasn’t going to give up because my grandmother who recently passed always told me not to give up. Because of that, I just kept telling myself ‘I know I’ve got more in me. It’s God’s plan and everything will happen when it happens.’”

That seems like an awfully low move from whoever was impersonating Pees here. Even if many NFL tryouts don’t lead to anything permanent, those tryouts are still a huge opportunity for players (and, often, they can be a step towards getting called back later, or to winding up in another league). Getting someone’s hopes up with a fake tryout offer, and convincing them to travel to a NFL team’s facility and get embarrassed there, is pretty mean.

And this led to an unfortunate moment for Bryant, who had been so excited about working his way up from an initial walk-on at Austin Peay in 2015 (he got other offers out of high school, but couldn’t accept them due to a low ACT score) to a team captain in 2019, helping the Governors go from winless seasons in 2015 and 2016 to a 2019 Ohio Valley Conference championship, and then getting what he thought was a shot at the NFL. Bryant overcame a lot to get there; his 2020 pro day was cancelled thanks to COVID-19 and he went undrafted that year, but spent much of the year training and attending showcases like the Futures Pro Football Showcase in St. Louis in hopes of getting a shot this year. He wasn’t taken in the draft and didn’t get an immediate post-draft offer, so the minicamp invite here probably sounded like a great opportunity for him. But it was all fake in the end, and that’s rough to see.