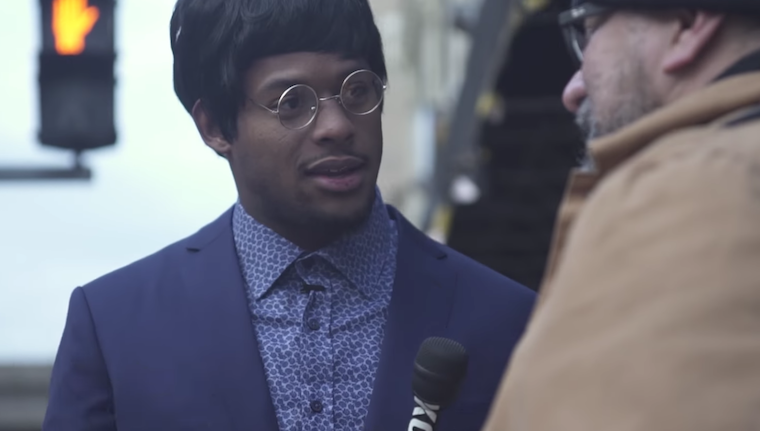 As the AFC’s second seed for the 2018 NFL playoffs, the Pittsburgh Steelers are off this week with a first-round bye. But while the Steelers wait to see which of the wild-card teams they’ll host next week, the TV networks televising this weekend’s playoff games may have missed an opportunity by not hiring JuJu Smith-Schuster to work a reporter.

The Steelers rookie wide receiver demonstrated his skills as an on-air correspondent last month before Pittsburgh was scheduled to play the Baltimore Ravens. Why Smith-Schuster waited nearly a month to post the footage on YouTube is unclear, but maybe he did so during his team’s off-week so the clip couldn’t present any sort of distraction while the Steelers prepared for their playoff opponent.

Smith-Schuster donned a wig and glasses to pose as “John Smith, professional news reporter” to interview fans on the street in downtown Pittsburgh about the Steelers’ upcoming matchup with the Ravens and the receiver’s controversial hit on Cincinnati Bengals linebacker Vontaze Burfict in their previous game.

But some Steelers fans know their team well, and immediately recognized who was underneath that questionable wig and glasses. (Those fans probably would have figured out that Clark Kent is Superman, had the Daily Planet reporter ever interviewed them on the street.) Check out the clip:

OK, maybe the guy wearing a Smith-Schuster jersey should have been more aware of who was interviewing him — especially when the cameraman asked him what he would say to the receiver if he was standing right there.

But he eventually figured it out. Hey, being on camera with a microphone in your face can make anyone nervous. Plus, he was visiting from San Diego. That Pittsburgh cold might have affected his cognitive recognition.

Smith-Schuster just finished a strong rookie season for the Steelers, finishing third on the team with 58 receptions and second in receiving yards with 917 yards and seven touchdowns. He’s also earned some notoriety among football fans for his personality, best demonstrated by entertaining touchdown celebrations.

But as this video showed, he has some potential on TV as well. Which network will hire him first to do some NFL reporting? Or should he replace Jon Gruden in the Monday Night Football booth? Maybe when the Steelers are on the broadcast, he could be the league’s first active player-analyst.