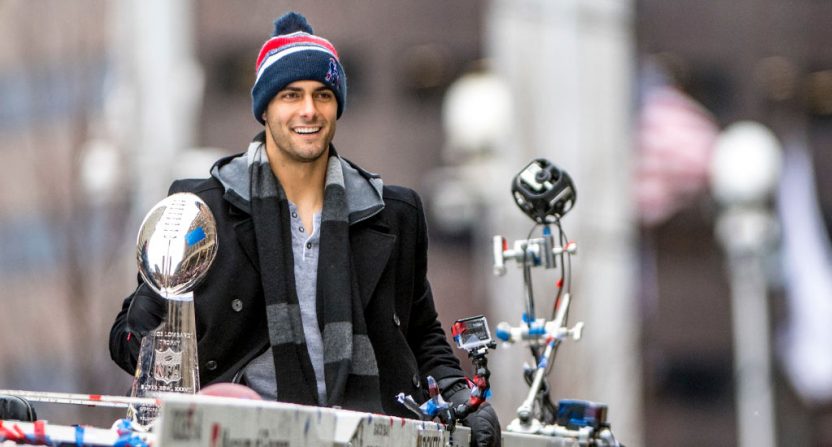 Tom Brady is still the New England Patriots quarterback for the foreseeable future, but waiting in the wings to take over is Jimmy Garoppolo, much like how Aaron Rodgers backed up Brett Favre.

“(Garoppolo) went out and played in the regular season and he played very well. He’s got that kind of gunslinger confidence. That Brett Favre, Aaron Rodgers kind of confidence. He practices hard, he prepares hard. He’s a good kid, he’s young. I think he’s a good player,” Edelman said on NFL Network.

The 25-year old Garoppolo played in six games this year and had a completion percentage of 68.3%. Overall, he finished with 502 passing yards, four touchdowns, and no interceptions.

“I’m not a paid G.M. so I don’t know the whole value thing. As far as a guy that I could play with every single day, Jimmy Garoppolo, I mean, the guy’s a stud,” Edelman said.

Because of the Deflategate suspension at the start of the season that cost Brady four games, Garoppolo was the Patriots’ starting quarterback to open up the season. During Week 1, the QB was 24-for-33 with 264 yards, a touchdown, and no picks against the Arizona Cardinals. In Week 3, he went 18-for-26 with 232 yards, three touchdowns, and no interceptions before he was injured in the second quarter.

“It was a good opportunity, and I went out and tried to take advantage of it and do everything I could,” Garoppolo said in the days before the Super Bowl. “And it worked out pretty well. The injury obviously wasn’t the best thing, but I think it was overall a good experience.”

Garoppolo’s status as one of the best, if not the best, backups in the league has made him a popular name for trade discussions leading into the NFL Draft. One possibility brought up by Charley Casserly on the NFL Network has the QB going to the Cleveland Browns for the 12th overall pick.

Why’s that? Well according to Casserly, Garoppolo is better than any quarterback available in the draft and the Browns (of course) badly need a QB.

“I’m not enamored with any of the quarterbacks in this draft, that’s No. 1,” said Casserly, the former GM of the Houston Texans and Washington Redskins. “No. 2, Garappolo today is better than any quarterback in this draft. Now, he’s had three years of experience. You look at him coming out (of college), the guy had a quick release, he’s smart, he knows where to go with the ball. The guy is accurate, and he can make some plays on the move. You see all (those things) in the NFL. His deep-ball accuracy, you’d like that (to be) a little bit better.”

Whether the Patriots actually make this trade remains to be seen. While many NFL teams would love to trade for Garoppolo, you’d have to think the Patriots want to hold on to him for as long as possible in case Brady decides to retire or gets injured.

At 25-years old, New England is in a prime spot to capitalize on Garoppolo’s value, but the last thing they want to do is have him sit on the bench as a backup for too long. Garoppolo has been Brady’s backup for three seasons, which is the same number of years Rodgers was Favre’s backup before taking over at the age of 25 – the same age as Pats’ current backup Jimmy G.