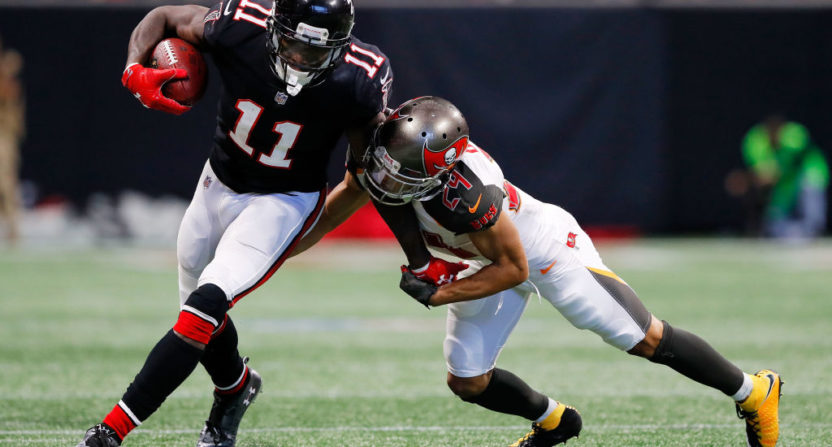 Julio Jones is a four-time Pro Bowler, a two-time All Pro and likely a future Hall of Famer. And you know what? He might be underrated.

On Sunday, Jones submitted one of the best games of his career, catching 12 passes for for 253 yards and two touchdowns as the Falcons beat the Bucs 34-20. With that performance, Jones set the record for most receiving yards through a player’s first 90 career games (8,649), passing Hall of Famer Lance Alworth, as well as the record for most receptions through 90 games (563), jumping Anquan Boldin.

Jones reached those marks through a freakish combination of size, speed, coordination, smarts and athleticism, all of which were on display Sunday, when he turned himself into a one-man highlight reel.

Here’s Jones finding separation, catching a pass in stride and beating several Bucs defenders to the edge for a 44-yard gain:

When in doubt… go to Number 11! pic.twitter.com/vrb0F5F1Ke

Here he is diving for the pylon after catching another deep ball from Matt Ryan:

? JULIO JONES IS GOING OFF ? pic.twitter.com/OXSGSoBtUh

How did he get so open on that play? By juking the socks off a Tampa cornerback.

Here is Jones making a nifty catch by the sideline:

You can't stop Julio… you can only hope to contain him. pic.twitter.com/3ebdYC16Uc

Oh and here he is beating a helpless defender for a 51-yard touchdown… on a pass from fellow receiver Mohamed Sanu:

And just like that, Jones turned what looked like somewhat of a down season by his standards (tied for fifth in the NFL in receiving yards, 12th in receptions, only one touchdown catch) into a typically excellent one. Over the last few years, many great receivers have emerged and been celebrated, from Antonio Brown to Odell Beckham Jr. to DeAndre Hopkins, but few (if any) provide such dependable brilliance as Jones.

There is also no receiver in football as capable of exploding as Jones is. The Falcons star now has three times as many 250-yard games over the last four seasons as the rest of the league combined.

Julio Jones now has 253 yards today. There have been four 250+ yard receiving games in the last four seasons:
Julio Jones has three.
Antonio Brown has one.
The rest of the NFL has none.

Jones will more than likely wind up with a bust in Canton one day, and when he does, a few clips from his performance Sunday could very well make the highlight reel.