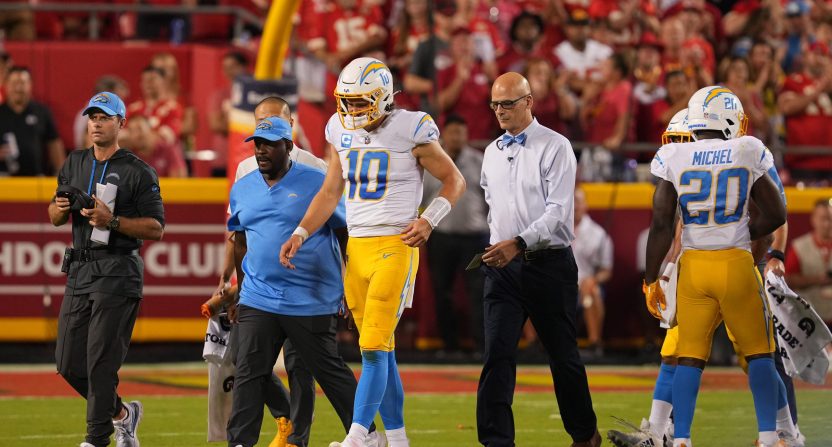 Taylor, who was the Chargers’ starting quarterback before Herbert, had his lung punctured by a team doctor right before a 2020 game when he was attempting to give Tyrod a painkilling injection. Taylor did not file a grievance against the team but it was a severe blow to their reputation over such things.

Herbert is coming into this Sunday’s game with some severely injured ribs and there’s a concern he’ll need a painkilling injection as well. However, with the memory of the Taylor incident still fresh, if the team has to give him something, it will be an ultrasound-guided injection that allows the team’s medical staff to administer the painkiller in a way that avoids the lungs or any other vital organs, according to ESPN’s Chris Mortensen.

If Justin Herbert chooses to take a pain injection today, it will be done with the assistance of an ultra sound imaging monitor to guide the administering doctor to appropriate site.
Sources say Herbert received an injection to practice on a (limited) basis with mixed results.

Per Mort, Herbert did practice once this week after getting a painkilling injection and the results were mixed. It remains unclear whether or not he will play against the Jacksonville Jaguars on Sunday.

Whether he plays or not, the news of a Chargers team doctor giving a quarterback an injection has a lot of NFL folks worried for Herbert’s safety.

The Chargers team doctor who stabbed Tyrod Taylor in the lungs while trying to give him an injection getting ready to give Justin Herbert an injection in the vicinity of his lungs https://t.co/1oPJo9DA8Z pic.twitter.com/wREYI8zjPQ

Justin Herbert getting ready to receive a pain injection from the Chargers doctors and remembering how he got the starting job from Tyrod Taylor pic.twitter.com/MrPASffTqI

A note that the last time a Chargers QB (Tyrod Taylor) was in a similar situation the injection punctured his lung. https://t.co/UidclIapYz

We've seen this movie before.

PROTECT THE YOUNG PRINCE JUSTIN FROM DR. STABBYLUNG AT ALL COSTS!!!! https://t.co/FjEYI5QukV

Can we make sure it isn’t the same doctor that did this to Tyrod? That’s all I ask https://t.co/XQAeiTmfqX